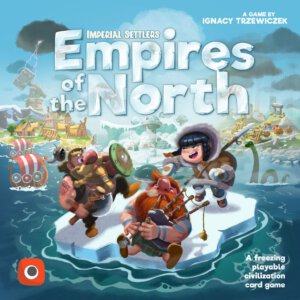 The latest standalone entry into the Imperial Settlers franchise will be arriving this Summer from Portal Games. Imperial Settlers: Empires of the North is a card game which will set three distinct factions (Vikings, Inuits, and Scots) against one another as each aims to dominate the region. The game is for two to four players, ages 12+, plays in around 45-90 minutes, and will carry an MSRP of $60.00 when it arrives in August.

Imperial Settlers: Empires of the North is a new, standalone card game in the established Imperial Settlers universe, with players heading to the far north where three different factions live: Scotsmen, Inuits, and Vikings. Take on the role of leader, and make your faction into the best empire in the world!

Choosing the faction is only the first step, though, as each faction can be played using one of the two separate and unique decks. Yes, in the base game, players will find six pre-constructed decks ready to use straight out of the box. Each one offers a completely different gameplay style!

Develop your economy, deflect your opponent, and fight for dominance in the north. Learn new mechanisms, and experience a unique style of Imperial Settlers. Will you be able to create the most successful civilization in Imperial Settlers: Empires of the North?