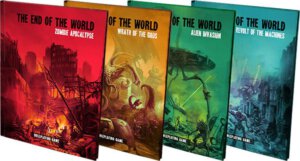 Fantasy Flight Games is releasing a new roleplaying line and the title, and focus, is The End of the World. Consisting of four standalone books the series will tackle the undead (Zombie Apocalypse), supernatural (Wrath of the Gods), extraterrestrial terrors (Alien Invasion), and – for those Terminator fans out there – science turning against humanity (Revolt of the Machines). While I can’t say the concept of “playing as yourself” is anything new, nor very successful in actual table top practice honestly, each setting in The End of the World series will task players with surviving in a very nasty universe.

No word yet on the page counts for the books but early indications are each will carry an MSRP of $39.95 and the first in the line, Zombie Apocalypse, is set for a Q4 release..

“We’ve got everything we could ever need here. All we gotta do is bar the door, board up the windows, brick up the chimney, seal the air vents, and make sure nothing – and I mean nothing – can see us moving in here. It’s basically paradise.”
–A survivor who has clearly thought of everything

Journey straight to the apocalypse with The End of the World roleplaying line, four settings of horror and survival set amid humanity’s last days:

If you’ve ever wondered how you might cope in the face of the apocalypse, this RPG line gives you the chance to find out. Beginning with Zombie Apocalypse, each of these books allows you and your friends to play as yourselves, in your own home town, using whatever gear you can find as you desperately struggle to survive another day in the tumult of humanity’s destruction. Of course, the different variations of the apocalypse are nearly limitless, and you may find humanity threatened by mindless zombies, the rise of artificial intelligence, alien invasions, or the wrath of the gods.

The End of the World books offer a different roleplaying experience than other roleplaying games. In many traditional roleplaying games, you play a fictional character, ranging from a human thief, to a dwarf war-mage, and beyond. InThe End of the World books, however, you play as yourself! Before your first game, you’ll create an abstracted version of yourself, focusing on six characteristics: dexterity, vitality, logic, willpower, charisma, and empathy. These characteristics help you to determine exactly what you’re capable of in the chaos of the apocalypse. In addition to these characteristics, you’ll develop the in-game version of yourself further by adding positive and negative features. Features are non-standardized, important aspects of your character that are much more detailed and specific than a simple number. Each feature is a word or phrase describing one of your strengths, weaknesses, or eccentricities. You may have the Iron Stomach feature to support you in the presence of blood and gore, but you may also have to deal with the Out of Shape feature if you’re trying to sprint away from an alien invader.

Because you’re playing yourself at the end of the world, instead of a thousand-year-old elven warrior, the gear available to you is similarly restricted. As luck would have it, the apocalypse begins as you and your friends sit down to play a roleplaying game. There’s plenty of pencils and paper close at hand, but that won’t do much good against a zombie horde. Do you bring cash and hope that other survivors accept it as currency? How much battery life does your cell phone have left? A butcher knife from the kitchen might be the best weapon you can find at short notice. From the first signs of the dawning apocalypse, humanity’s priorities reshuffle dramatically. You and your friends have no chance of stopping the incoming apocalypse – you’re not superheroes after all. The best you can hope for is to survive and protect those close to you. In most instances, the first necessity you and your group face is the need for reliable weapons. Whether you’re facing aliens or hordes of zombies, you won’t get far if your best weapon is a frying pan.

Even after you’ve acquired some weapons to protect yourself, your challenges are just beginning. You’ll need to scavenge food, water, and medicine, and you can be sure the grocery stores will be looted in the first few days of the apocalypse. A secure shelter will also prove crucial in the long-term, but finding a hiding place that can resist supernatural attacks or alien technology may prove nearly impossible. In every game of The End of the World, you confront these necessities face-to-face… and that’s not even mentioning the foes you may battle first-hand.

Conflict is inevitable in mankind’s final days, whether you’re physically battling a zombie, outwitting a robot’s AI, or convincing a soldier to give precious resources to you instead of another survivor. Any kind of combat can result in stress, which can lead to deadly traumas. Trauma can heal, given enough time, but at the end of the world, you rarely have time to set a broken leg or help a friend overcome her paranoia.

The End of the World line focuses on four distinct ways that the apocalypse might come to pass, and there’s plenty of variation within the books. Each of the four books in The End of the World line offers five unique scenarios, and although each scenario in a book relates to the book’s titular theme, they offer very different explanations for the end of mankind. Scenarios can differ drastically regarding the government’s response, the reactions of civilians, the enemies you face, and even the speed of the apocalypse. Radiation might cause dead animals and humans to rise, hungry for the flesh of the living, or an insidious alien species may attack and bring civilization crashing down almost before we know it.

Not even the madness and horror of the world’s ending can last forever, though. Eventually, apocalypse transitions to post-apocalypse as the remnants of humanity adapt to survive in the midst of the a new world order. Survival in the post-apocalypse carries its own dangers, just as deadly as the menaces of the apocalypse. You may join a secret resistance battling an alien race that has enslaved humanity, or you may huddle in underground shelters beneath a toxic wasteland after the world’s governments used nuclear warheads to exterminate the zombie plague. Every scenario includes a plethora of characters and locations for you to encounter throughout the apocalypse and post-apocalypse. Your search for food, water, and other key resources may force you to flee from undead rats in the sewers beneath your city, or you may witness Cthulhu heaving himself ashore while exploring a seemingly abandoned ocean village. Whether you battle robotic killers from street to street or bargain with your alien overlords in an exotic mothership, you’ll find plenty of NPCs and locations to create encounters within each of these scenarios.

The World Is Ending

No matter how you choose to experience the apocalypse, you’ll find countless struggles to survive in The End of the World line. Whether you want to test your skills and talents against zombies, aliens, machines, or supernatural beings, you’ll find the apocalypse for you in Zombie Apocalypse, Wrath of the Gods, Alien Invasion, and Revolt of the Machines.