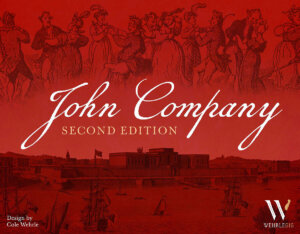 A revised edition of the John Company board game is burning up Kickstarter for Wehrlegig Games. Designed by Cole Wehrle, the game takes players into the world of the East India Company as Britain builds an empire during the 18th and 19th centuries. John Company is for one to six players, ages 13+, and plays in 90 to 240 minutes. You can reserve a copy for an $80.00 pledge through April 20th with an expected delivery in March next year.

Chart the rise and fall of the East India Company in this cutting negotiation game about high society at the dawn of the British Empire. Created by Cole Wehrle, the award-winning designer of Root and Pax Pamir, John Company: Second Edition is a deep and thoughtful design from a master builder of historical games.

John Company is the second game in our series on the British Empire. In our previous game (Pax Pamir), players attempted to construct a new future for a land caught between two global rivals. This game presented agents of empire as hapless interlopers, caught up in a struggle that they could scarcely understand.
In John Company, players move deep into the bowels of empire and take the roles of ambitious families out to make a name for themselves at the dawn of the British Empire.

Though often upsetting, this vantage point offers a better understanding of how empires work in practice. Empire-building is one of the most common themes in game design, but the vast majority of games get the fundamentals completely wrong. Empires are certainly not heroic enterprises, but they are also not comic book villains, masterminding global domination. Instead, empires are something far more insidious. They are something that happens in aggregate, composed of a thousand little choices and many individuals with their own interests and ambitions.

John Company thrusts players into those thousand little choices. As matriarchs and patriarchs of ambitious British families in the eighteenth and nineteenth century, players guide their children to positions of respectability. To do this they will often cajole for positions of power and prestige within the British East India Company.
John Company offers players a new understanding of British history in the eighteenth and nineteenth century that reflects contemporary scholarship on the subject and extensive research into primary documents. John Company attempts to put the critical events of that time in their proper context and show how the imperial experience transformed the domestic culture of Britain. The East India Company lurked behind every building of a textile mill and every bit of wealth in a Jane Austen novel.

John Company is an uncompromising portrait of the people who made the Company and the British Empire what it was. It is as frank as it is cutting in its satire.  Accordingly, the game wrestles with many of the key themes of imperialism and globalization in the eighteenth and nineteenth centuries and how those developments were felt domestically. As such, this game might not be suitable for all players. Please make sure everyone in your group consents to this exploration before playing.