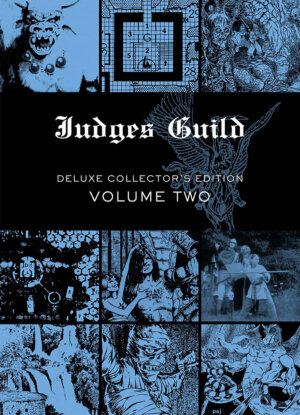 Next week will see the release of the Judges Guild Deluxe Collector’s Edition Volume 2 from Goodman Games. The oversized volume focuses on Jennell Jaquays and will include the classic Dungeons & Dragons adventures Dark Tower and Caverns of Thracia alongside the Book of Treasure Maps. This collector’s edition will carry an MSRP of $150.00.

Jaquays was a key contributor to Judges Guild in its early years. She founded The Dungeoneer, the early D&D-focused magazine that was later absorbed into the Judges Guild portfolio.

It will also contain the first six issues of The Dungeoneer. As with the previous volume, it will also contain collectible memorabilia from the personal collections of Jaquays and Bob Bledsaw, Jr. of the Judges Guild. These include personal recollections, photos of their time with (and before) the Guild, insights and observations from modern designers, a selection of art work, original drafts and notes from early play sessions, and more.

Like volume 1 in the series, volume 2 will be oversized in order to best present the original Judges Guild Journals at their original size.