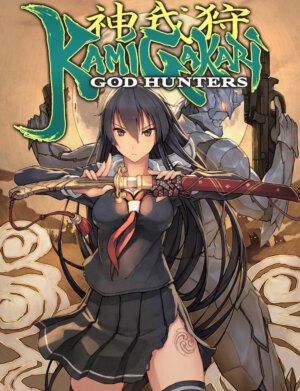 Sea Serpent Games has released a new Japanese action theme RPG at DriveThruRPG. In Kamigakari: God Hunters, the player characters are normal people, imbued with godlike powers, who are called upon to battle supernatural forces. The 277 page PDF is available right now for $25.00.

Kamigakari: God Hunters is an action-packed Japanese RPG about everyday people imbued with shards of godhood. As dark gods encroach on our world, these innocents must become God Hunters and protect the thinning borders of the supernatural world! Will you become a magician and discover the Transcendent Promise? Will you defend your hometown with a heart full of burning justice and a jump-kick that pierces the heavens? Will you travel the world as a passing Godslayer, helping those you meet along the way? Or will your very soul burn away in the pursuit of power, transforming you into a new dark god? This world cries out for heroes! What kind will you be?

The enigmatic Mononoke and malevolent Aramitama await your challenge! Unravel their machinations in the real world, then enter the Spirit World for the final showdown!

With the Arms System, you can upgrade and customize your weapons endlessly! Turn that prop katana into a blade that rivals Masamune! Kit out your cell phone to cast earth-shattering spells! Or blast your enemies to bits with good old-fashioned firepower!

Use the Dice Control System to save yourself from bad rolls, but use it sparingly! Do you want to be sure you’ll spot the critical clue in an investigation? Or do you want to finish off the final enemy with your ultimate attack?