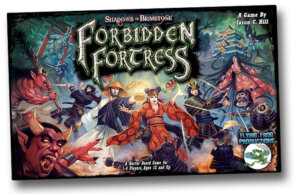 The latest addition to the Shadows of Brimstone starter line up is on the horizon and, following a massive $1.11 million Kickstarter run, there’s still time for you to get a late pledge in for Forbidden Fortress. The Flying Frog Productions core game brings the fast paced miniature action to feudal Japan as stalwart heroes battle hordes of invading demons and monsters. Storm the mysterious fortress to slay a variety of creatures drawn from Japanese legend and myth. One really cool aspect of the game is the ability to crossover all current Shadows of Brimstone content to Forbidden Fortress and vice versa. Talk about an ultimate team up of old west gunslingers and Japanese samurai taking on the big baddies!

Shadows of Brimstone is slated to arrive in Spring 2018 and you can jump on board to get a ton of extras and addons at great prices while they’re still available. You can dive in for the deluxe experience, at the $350.00 Shogun level, and score over $900.00 worth of expansions, minis, and bonus content. For those unfamiliar with the Shadows of Brimstone system, the starter Sumo level will still net you over $375.00 of goodies for a $125.00 late pledge. Keep in mind the MSRP of just the core game will probably be around $99.95 so even the Sumo pledge is going to net you a ton of miniature goodness!

Players take on the role of courageous Heroes, fighting back a tide of evil creatures and demons that have invaded their world! Play as the stalwart Samurai Warrior, using your mastery of the Katana and your bushido code of honor to defeat your foes in combat, the nimble and deadly ninja Assassin, using stealth and speed as weapons, the Traveling Monk, a member of an ancient Yamabushi order devoted to fighting supernatural creatures wherever they may be found, and the powerful and mystic Sorceress, who wields Elemental Magik to crush her enemies.

Set in Feudal Japan, the Heroes must brave the Forbidden Fortress; a feudal castle overrun with all manner of Demons, Ghosts, and Monsters inspired by Japanese myth and legend. The massive Oni, red beast-like ogres wielding giant clubs, stalk the halls, while deadly Tengu sword masters descend from the skies with their raven wings to attack the Heroes. Legions of Samurai Dishonored Dead rise from the grave, and writhing Acidic Tentacles burst from the floor to spit acid and feed on the Heroes with their razor sharp teeth.

But at the heart of the fortress lie the most terrifying and epic foes of all; the Harionago, a ghostly, demonic woman, held aloft by the twisting strands of her animated hair, which is also used to entangle and slash at the Heroes with its vicious barbs, and the towering Living Statue, possessed by Darkness to break away from its posts, wreaking havoc and smashing the castle it was once built to protect!

Shadows of Brimstone: Forbidden Fortress can be played on its own as a stand-alone game, or it can be used in combination with any and all of the other Shadows of Brimstone products already available! It is fully compatible, in every way! For new players, Forbidden Fortress will make a great introduction to the world of Shadows of Brimstone, and for veteran players, it adds a ton of new content, including two brand new Worlds to explore – the Japanese castles and temples of the Forbidden Fortress and a living world inside a massive creature in the Belly of the Beast. It also includes a brand new set of Heroes and Enemies to add to your games. With the option of starting your Heroes in Feudal Japan or the Old West, or having a mixed party of Heroes, drawn from both worlds, the possibilities are endless!

The Belly of the Beast OtherWorld

Forbidden Fortress also adds a brand new OtherWorld on the back side of the Map Tiles… The Belly of the Beast! Backers from the original Brimstone Kickstarter may recognize this as an OtherWorld Stretch Goal that was not unlocked during the original campaign. When we started formalizing what would be in Forbidden Fortress, the idea of adding the Belly of the Beast as the OtherWorld on the back side of the tiles was a perfect fit! What could be more in keeping with the Japanese theme than allowing the Heroes to find their way through a portal that leads inside of an unspeakably massive creature; battling all sorts of living organs and parasites, and fighting off the Flesh Mites, Acid Blobs, and Parasitic Tentacles that inhabit this ‘living’ world.

The Temple of Shadows Deluxe Expansion

The Temple of Shadows was once the home of an ancient and powerful order of Yamabushi monks, dedicated to battling supernatural creatures throughout the land. It was foretold that one day the Great Dragon King, Sho-Riu would return to destroy the Earth, and only they could stop him. When the meteor came from the heavens and devastated the mountain, the Dragon King came with it. For generations the monks had been training for this moment, and as Sho-Riu descended on the temple, they gathered their strength and prepared to fulfill their destiny.

But their victory was not to be. Reigning down death and destruction, the Dragon King broke through the monk’s defenses and utterly destroyed the order, devouring their souls and bringing Darkness and shadow into the sacred temple. Those few that survived were scattered and leaderless, but they would not sit idle. Traveling the roads and countryside, the last of the monks dedicated their lives to finding new Heroes that could one day fulfill the prophecy and reclaim… the Temple of Shadows!

Building on the themes from the Forbidden Fortress Core Set, the Temple of Shadows Deluxe Expansion adds a ton of new content for the Feudal Japan setting and the Belly of the Beast OtherWorld. This boxed set includes:

Enforcer – An outlaw and a gangster, the Enforcer is an anti-Hero renegade who favors brute strength and intimidation over elegant fighting weapons and technique. His tattooed body is hardened and scarred from a lifetime of brutal brawling.

Geisha – Beautiful but deadly, the Geisha is a cunning and stealthful fighter. She employs deception and trickery to evade and confuse enemies, while slashing with her hidden blade from behind. Her comforting presence can heal the Heroes, both body and soul, to keep them in the fight.

Soldier – The Soldier is a veteran of warfare who has seen many battles and is an expert marksman with his Rifle. Though he does not have the style or family heritage of the Samurai, he is a hardened foot soldier that has access to a variety of different weapons and training.

Kitsune – A guardian spirit, the Kitsune has come forward to defend this world against the demons and creatures that would threaten to destroy it. Taking on a human-fox form, the Kitsune uses supernatural tricks and auras to protect the Heroes, while darting between enemies to deliver killing blows with her deadly blades.

Chochinobake – These demon-possessed, animated lanterns swarm the Heroes, relentlessly biting and burning them with terrifying speed.

Takobake Warriors – Once a noble clan, the Takobake have embraced the power of the Dark Stone. Using its energy to grow in strength, they have become mutated into tentacled monstrosities, twisted and evil.

Skin Crawlers – These large, parasitic creatures burrow through the flesh and muscle walls in the Belly of the Beast, rising up from the pools of sticky mucus to assault any Heroes foolish enough to enter into their feeding grounds.

The Fallen Shogun – This dreadful leader of the Takobake clan was one of the first to discover the magical properties of the Dark Stone. Weaving it into his armor, and forging it into weapons, he has gone mad with power, mutating into a giant among men! Declaring himself Shogun, he now sweeps across the land with his legions of mutated soldiers, conquering any who would stand in his way.

New Material for the Forbidden Fortress and Belly of the Beast

This expansion also features 4 new double-sided Map Tiles with new rooms for the Forbidden Fortress on one side and the Belly of the Beast on the other, 6 New Missions for the Temple of Shadows, loads of new cards and counters, and much more!