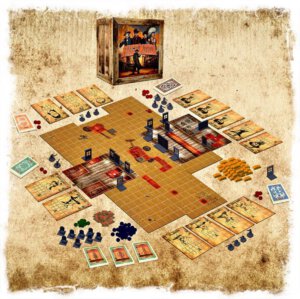 Earlier today White Label Games launched a new Kickstarter to bring the High Noon miniatures game to the public. In the game, each player leads their posse of characters into battle in and around the fictional western state of Saratoga. High Noon is for two to six players and plays in one or two hours. You can reserve a copy of the core game for an $89.00 pledge through June 4. Expected delivery is this October.

In High Noon, two or more players control different posses vying for dominance at the turn of the 20th Century in the fictional Wild West state of Saratoga. Players send their posses into battle to settle their scores the only way they know how: gunslinging.

Loot crates are strategically placed across the board and have the ability to give each posse a unique advantage during the firefight. Within the loot crates, players will find valuable supplies, medicines, and firepower to give them an edge against their opponents.

Victory is declared at the end of twelve rounds at which time the posse that has collected the most gold wins. Gold is awarded by how much damage and mayhem is dealt in the shootout.

Alternatively, players can continue the fight until one posse remains and is declared the “Last Posse Standing”.