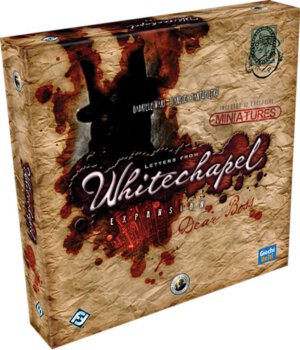 Fans of the hit Letters from Whitechapel will be pleased to learn an expansion has arrived from Fantasy Flight Games. Dear Boss includes more variants to the base game, twelve sculpted miniatures, as well as three new modular decks to immerse players further into the historical background of the era. The expansion is in stores right now and carries an MSRP of $29.95.

How can they catch me now. I love my work and want to start again. You will soon hear of me with my funny little games…

The case has remained unsolved for months. Despite their best efforts, the police are no closer to capturing the shadowy monster terrorizing the Whitechapel district. Letters from the unseen killer taunt the them each time he claims a new victim and disappears into the night, narrowly escaping their clutches. But the police are vigilant. They continue to patrol Whitechapel, hoping to pick up the trail…

The tense cat-and-mouse action of hunting down Jack the Ripper—or evading the police as Jack himself—returns with Dear Boss, the thrilling expansion for Letters from Whitechapel, available at retailers now!

Dear Boss returns you to the streets of London and the hunt for the enigmatic serial killer known as Jack the Ripper. As the monster continues to prowl Whitechapel, baffling the police and putting residents on edge, Dear Boss gives you new tools to face this terrible threat. Additionally, this new expansion draws you deeper into the historical circumstances surrounding the Ripper killings of 1888 with even more variants than those found in the base game. Alongside the twelve beautifully-sculpted plastic miniatures that replace the Policeman, Jack, and Wretched tokens from the base game, Dear Boss provides the definitive Letters from Whitechapel experience.

Combined with the variants from the base game, the three new modular decks in Dear Boss allow you to find the perfect balance between Jack and the police. No matter which side you choose, you’ll have plenty of new tools to either aid you in closing the net on the killer or giving the police the slip.

If you are playing as the police, two of the new decks give the investigators new methods for tracking down their elusive quarry. The new Policemen cards grant every officer a special ability, allowing the police to bend the rules of the game and more efficiently corner Jack. While Edward Watkins is the Head of Investigation, for example, he allows a patrolling constable to look for clues after moving during the “Police: Hunting the Monster” phase. Even though that constable won’t be able to perform an action during the next phase, this ability can put the police on Jack’s trail much sooner than normal.

At the same time the police are getting more freedom, Jack finds himself more constricted than ever if one of the Jack Suspect cards is in play. The Ripper murders were never solved, and Dear Boss explores twenty-five of the potential suspects through this new deck. Each card provides details about the suspect’s life and their potential links to the Whitechapel killings. Additionally, if Jack is randomly assigned one of these cards, his hideout, targets, and movements are limited on certain nights. Aaron Kosminsky, for example, is limited to one Coach and two Alleys on the first Night. Although this card remains secret, it greatly limits Jack’s options for movement and placing his hideouts, making him more predictable and vulnerable to the police. If they’re paying close enough attention, that is. 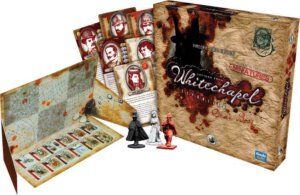 Even though the Policemen and Jack Suspect cards tip the scales in the favor of the players taking the role of the investigators, Jack also has a few new tricks up his sleeve. If the police are enjoying too much of an advantage, saucy Jack can always turn the tables with his new Potential Victim cards. Jack can play the nearest one of these cards whenever he targets one of the Wretched, giving him a leg up on the police and increasing his chances of eluding their grasp.

In addition to providing information about the real victims of the Whitechapel murders, these cards also give Jack an advantage over his pursuers, such as giving him more time to escape. Combined with the optional Jack’s letters found in the base game, these cards make catching up with Jack a tall order indeed.

In addition to the new gameplay variations it introduces, Dear Boss heightens the experience of playing Letters from Whitechapel by immersing the player even more deeply in the historical circumstances surrounding the Whitechapel murders. Each of the new cards provides a glimpse into the lives of the police, suspects, and victims who experienced these mysteries firsthand.

Coupled with the twelve beautiful miniatures, sculpted with exquisite attention to detail in order to draw you ever deeper into the drama, Dear Boss invites players to Victorian England like never before.

Pick Up the Trail

Dear Boss is now available, and the foggy streets of London await you. Will you, as the police, utilize these new tools to track down one of history’s most notorious serial killers? Or will you take on the role of one of that dreaded monster, stalking the night, only to vanish without a trace? Choose your movements carefully. Whichever side you’re on, one wrong turn could lead to disaster.

Dive even deeper into the Victorian era and get a first-hand glimpse into some of the world’s most infamous unsolved murders with Dear Boss, now available at a retailer near you!