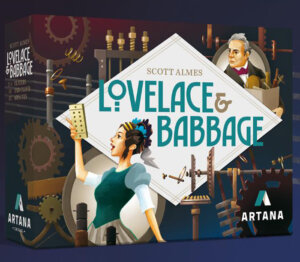 The latest title from Artana Games launched on Kickstarter today and quickly funded in the first hour. In Lovelace & Babbage, designed by Scott Almes, players take on the roles of programmers in the earliest days of computing as each looks to create the most effective program and satisfy the needs of famous patrons. The game is for two to four players, plays in 15 to 30 minutes, and you can reserve a copy of the game for a $20.00 pledge through October 23rd.

Play as a pioneer of early computing – such as the brilliant Ada Lovelace or the marvelous Charles Babbage – to program the very first computer. Each player has their own unique Subroutines and they compete to create the best personal program.

At the game’s start, the computer is simple and you have a limited number of Operations, 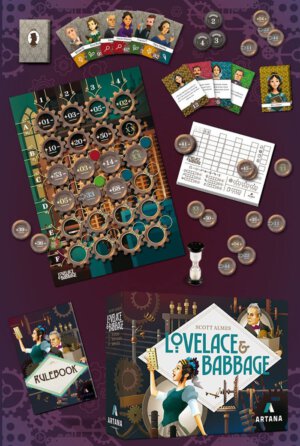 Your goal is to identify a sequence of Engine Components in real time so your personal program generates values matching Patron and Subroutine cards. Doing so gains Influence in five different areas from the Patrons and unlocks expanded abilities for your programmer via Subroutines. Everyone’s program starts at the same place – what you do after that is up to you!

As the computer evolves, and your personal program choices impact everyone else, the race to see which programmer is best really heats up! Winning will require just enough speed to stay ahead of your opponents and just enough care to not go TOO fast. After four rounds, whoever scores the most points by developing their own computer program and collecting Influence in various areas is declared the winner!

Welcome to the fabulous world of the first computer engineers – Ada Lovelace and Charles Babbage!