Fantasy Flight Games has released a print on demand expansion for Mansions of Madness, entitled  Season of the Witch designed by Richard Launius.

So… I’ve ordered mine but for those who need more info from FFG:

A bright young Miskatonic University student has disappeared, having checked in to an infamous Arkham boarding house to study its reported supernatural properties. Now, as the celebration Walpurgis Eve approaches, you and your fellow investigators are tasked with venturing into the decaying Witch House and solving a mystery that has plagued Arkham for generations. But are you prepared to face the horrors that await you?

Season of the Witch is a Print on Demand story expansion for Mansions of Madness! Designed by Richard Launius (Elder Sign), Season of the Witch sends players on a tense and terrifying race against the clock. Can you solve the mysteries of the Witch House before they consume Arkham forever? 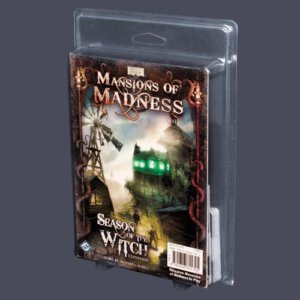 Fantasy Flight Games has released a print on demand expansion for Mansions of Madness, entitled Season of the Witch designed by Richard Launius.
0
Awful