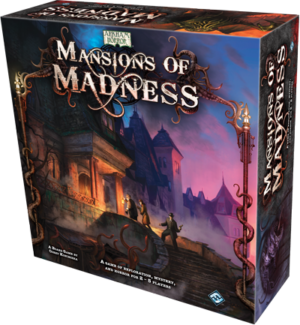 Much to my sadness, Mansions of Madness from Fantasy Flight Games has been delayed – due to production problems with the miniatures – until sometime in the first quarter 2011.  I know this highly anticipated Cthulhu Mythos based game of horror is great fun, seeing I had the opportunity to play a demo at FFG’s Arkham Nights back in October.

Here’s hoping the production problems will be solved quickly!

The info from FFG:

With over fifteen years of creating the most immersive and thematic gaming experiences available, Fantasy Flight Games has built a reputation for components of the highest quality. Whether exploring a dungeon’s depths in a world of high fantasy, maneuvering a massive fleet through a hostile galaxy, or battling otherworldly horrors in the streets of Arkham, players have learned to expect a level of aesthetic detail that captures the imagination.

It’s with these high standards in mind that we announce an updated estimate for the release of Mansions of Madness, the board game of occult horror and mystery. Some of the initial monster molds resulted in figures that did not meet our expectations of excellence, and consequently had to be redone. While this decision will ensure a product of the highest quality, it will also result in a delay.

Mansions of Madness will be available during the first quarter of 2011. We realize that this is beyond the range of dates we originally announced. However, we’re confident that once you see the final product, you’ll agree it was well worth the wait.