Big changes have been taking place at The Little Game Company That Could and one of them is the announcement of the new Gold Banner line of games coming soon from Victory Point Games. These new releases will feature a higher level of component quality as just a start!

Going forward with our new manual game releases, beginning with the release of Leuthen, these games will join the ranks of our new “Gold Banner” line. You will be able to identify them by their bearing a VPG logo with a gold banner on their covers and VPG product page. This identifies them as having the newly upgraded VPG components inside the package.

The printing for Gold Banner games is primarily done using our new Canon Imagepress superprinter. The rules are stitched Leuthen rules booklet(stapled) books/booklets bearing the game’s front and back covers. This will give the printed parts components a very crisp look with a nice, semi-gloss sheen. 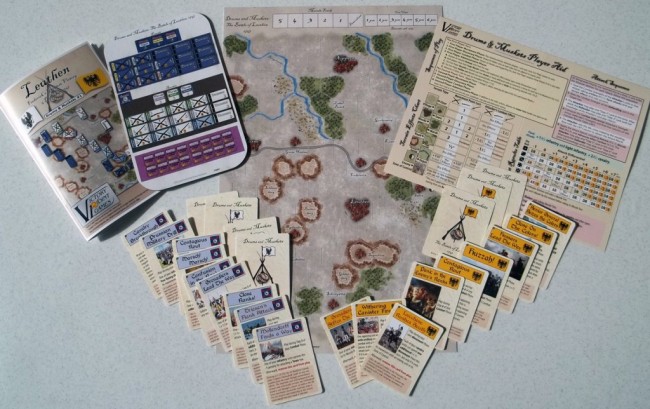 You will also notice that lightly glossed sheen on the new VPG, all full-size (2.5” x 3.5”) cards; These cards will have their fronts and backs well aligned and be machine cut and slit to smooth perfection. In addition, we will be rounding their corners so that they smoothly shuffle and ingress into card sleeves as “real” playing cards should.

The maps and player aids can be also be “bled” (i.e., with printing all the way to the edge of the paper) when the artists desires it, and multi-section maps should align properly when laid side-by-side.

It is also the new VPG counters that will distinguish a Gold Banner game. We have acquired (after considerable experimentation) a laser cutter for the primary purpose of cutting our counters. We have had to address issues inherent that “burning” the paper with a laser beam entails, of course, but we’re satisfied that we’ve dialed into a very workable set of solutions. The power of the laser cutter frees us from the set patterns of using steel-ruled dies for cutting the counters, so not it is possible to cut any shape we can imagine and conform the pieces with the specific needs for a particular game. We can cut square counters with rounded corners, star-shaped markers, standee pieces (that the players assemble)… anything goes. VPG manual games producer Nathan Hansen adds: 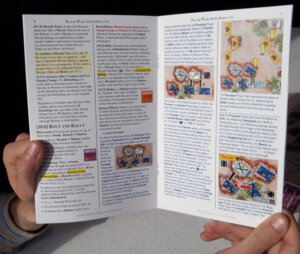 “We have a new toy, er… tool at our disposal, and it has been my great honor and pleasure to be our ‘go to guy’ to figure out how to best use it. Allow me to introduce our newest game making acquisition, The laser Nathan Hansen (L) learns the art of laser cutting!”

“This beast of a machine has not just one, but two 25-watt lasers (so it cuts with two beams simultaneously). This allows us to cut clean, flash-free counters of incredible thickness, and in literally any shape,” Hansen continued.

Hansen concluded, “Lately, I’ve been doing a lot of experimenting to really learn all the ins and outs of this machine, and then afterward taking the laser-cut results and doing side-by-side comparisons of our new VPG counters with various games in my library – and the best news yet is that I’ve yet to find anything from another company that quite compares to we can now do. And we’ll be doing even more with this machine as we continue to experiment and push the limits of its abilities.”

Best of all, and what Nathan is alluding to, is that we have upgraded our counter stock for Gold Banner games to terrific thick sheets of really dense paper. VPG’s Gold Banner counters are noticeably thicker than most wargame companies’ (e.g., Decision Games or GMT), and we even used a set of calipers to measure them against a sheet of counters from Fantasy Flight games, and ours edged them out; laid flat on a table you can feel the difference – and here you can see the difference with one counter each (and then a stack of three) from left to right: a standard VPG game, a GMT game, a Fantasy Flight game, and the new VPG Gold standard counters; note the difference in thickness!

The takeaway is that our new counters are thick; they sound like a piece of wood when you drop them on the table, they fit back pretty snugly into the sheet after you punch them out (if you really want to do that), and their semi-gloss coating even makes them moisture resistant (thanks to the wax in the printer’s toner). Truly, these counters harken back to the glory days of Yaqunito’s “thick as brick” game pieces of yore (only better).

We learned about our counters repelling moisture the hard way when Alan Emrich was teaching Dawn of the Zeds to our programming team using a prototype copy of the game made from the new printer’s components. When a Zeds unit was killed, he picked it up to toss it back into the Draw Cup, but instead, threw it in one player’s cup of hot tea that was near it! After being stunned for a moment, Alan fished it out and asked for someone to get a paper towel. They were too stunned still, so Alan ran to the kitchen and brought back some paper towels and carefully dabbed off the moisture from the previously floating counter. But when it was dry, Alan studied the rescued counter closely, and a strange look came to his face (which is not unusual for him). To Alan, that did not look like a counter that had absorbed moisture (and he’s seen plenty of those over the years). So he did an experiment right there on the spot…

Alan tossed the unit back into its Draw Cup, mixed the pices in it, and then poured them all out on the table. “See if you can tell which one was just rescued?” Everyone at the table and those who had gathered round to see what all the fuss was about studied the pieces closely and no one could tell the difference. Everyone smiled at this interesting and unexpected benefit from using the new printer to make our games!

The counter sheets themselves are also being cut with rounded corners for easy insertion and removal into the product package, as the height and width of a standard sheet of counters in a Gold Banner game will usually have the same dimensions as the game itself (i.e., either 5.5” x 8.5” or 8.5” x 11”). Being easier to slide in and out of the game’s polybag is important, as this will help customers perusing it when opening up that game at a retail store – and retail stores are going to be an important consideration for The Little Game Company’s distribution plan over the course of this year and next. 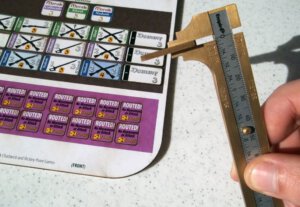 The oddest thing about the new, thick counters, with better printing and amazing laser cutting, is… the smell! Because of the thickness of the counter stock, the pieces feel like they’re mounted on a dense, lightweight wood (that possess great tinsel strength too, they’re really had to bend). Thus, there is a lingering rustic scent of burnt wood that hangs onto the countersheets long after they’re cut. This certainly gives your individually manufactured and assembled VPG game a “hot of the press” aroma.

t’s not an overpowering scent (and once you punch out the pieces and remove the counter sheet, it dissipates right away), but a rustic, outdoorsy bouquet is present when you open the package (where the aroma is “sealed in” when the game is assembled). You can see it in the darker edges of our new counters (pictured above), but there is no ash or soot on them that will stain your fingers while you play! Of course, we’re sure that reviewers are going to have a field day with this novel feature in gaming, but we have lived with a lot worse from our critics for a long time, and when you play with those glorious, gorgeous thick counters, we’re sure that it will all be worth it.

So, going forward, starting with Leuthen, our new game releases are joining the ranks of our Gold Banner line. These Gold Banner games will also shipped directly by Amazon.com to their customers (from their warehouse), in addition to our soon releasing them through the game industry’s normal distribution chain (this will happen later this year when we are prepared to make that move official, and it will take us some time to build a broad distribution base). All of these upgrades to create the Gold Banner line of games constitutes a huge leap of faith to make the investments requires to respond to your requests for component upgrades, so please support us and try a new Gold Banner game this year to see what we can do. You really need to experience how things have changed in the way we make our manual games for you, right here at The Little Game Company That Could.