Gamelyn Games founder Michael Coe is releasing a remastered edition of one of his first game designs, Dungeon Heroes. In the game, one player controls a dungeon delving party of adventurers while the other takes the role of the Dungeon Lord aiming to defeat the heroes. Dungeon Heroes is for one or two players, ages 14+, plays in 15 to 30 minutes, and will carry an MSRP of $30.00 when it hits stores later this Spring.

Welcome to the Dungeon!

Two players go Head-to-Head controlling opposing sides in a game of deduction and deceit. One player controls a party of four heroes adventuring into a dungeon for treasure. The other is the Dungeon Lord who reigns over the dungeon’s traps, treasures, and monsters. The heroes’ party consists of a Warrior, a Cleric, a Rogue, and a Wizard, who must work together, using each of their special abilities to overcome the puzzles presented by the scheming Dungeon Lord.

Dungeon Heroes is a tile-placement rogue-like dungeon crawl. One player controls an adventuring party consisting of four heroes: a warrior, a wizard, a cleric and a rogue. The other player is the dungeon lord. He creates the dungeon and controls the monsters within. The goal of the Dungeon Lord is to construct a devious dungeon layout by placing tiles turn by turn. When the Dungeon Lord runs out of tiles, the monsters enrage and hunt down the heroes. The heroes must unravel the Dungeon Lord’s scheme by disarming traps, killing monsters early and using powerful magic to reveal hidden areas. Their goal is to locate three treasures to win the game. The Dungeon Lord, quite naturally, wants to eradicate the Heroes.

Jeff McAleer
Founder/Editor-in-chief of The Gaming Gang website and host of The Gaming Gang Dispatch and other TGG media, Jeff tackles any and all sorts of games but has a special fondness for strategy, conflict sims, and roleplaying games. Plus, he's certainly never at a loss for an opinion...
Latest posts by Jeff McAleer (see all)
Tags: Dungeon Heroes, Gamlyn Games, Michael Coe 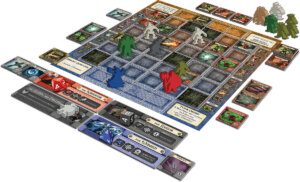 Gamelyn Games founder Michael Coe is releasing a remastered edition of one of his first game designs, Dungeon Heroes.
0
Awful