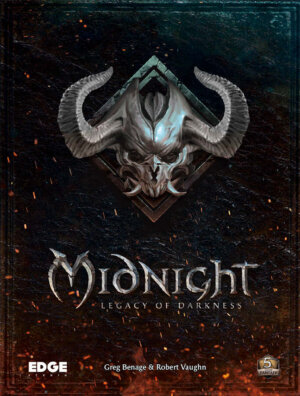 A third edition of MIDNIGHT – Legacy of Darkness has arrived in PDF for 5E. The popular EDGE Studio setting is one of dark fantasy, in a world on the brink of barbarism. The 368 page PDF is available at DriveThruRPG for $25.00.

A century has passed since the Shadow fell.

A hundred years ago, the forces of darkness swept in from the north. They crushed the free cities of the humans, drove the elves deep into the forests, and besieged the dwarves in their mountain strongholds. Now the corrupt lieutenants of a dark god rule the broken kingdoms with an iron fist and hunt down the few brave men who still stand against the barbarism consuming their world.

Midnight allows you to take on the role of brave heroes fighting against a relentless evil. Based on the 5th Edition System Reference Document published by Wizards of the Coast® under the terms of the Open Game License, this book is fully compatible with 5th Edition. Create a character from the diverse elven, human, dwarf, halfling, gnome, and orc cultures of Eredan, choose a heroic path that will make you a legend, and go to war against the sinister legions of Izrador and his legates!

Rules are not included in this book. You must have the 5th Edition SRD or equivalent source to use it.