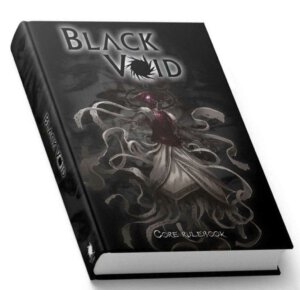 A new roleplaying system is on the horizon from Black Void Games and Modiphius Entertainment which has a setting I must admit sounds mighty interesting. In Black Void the remnants of ancient mankind are scattered among the stars, struggling for survival alongside a myriad of other life forms. The player characters represent the descendants of Earth who now embark on adventures filled with equal parts wonder and terror. The corebook arrives in September and carries an MSRP of $50.00 while an introductory campaign, Those Who Would be Gods, will hit hit stores at the same time carrying an MSRP of $20.00.

In the days when Babylon was the greatest city on Earth, mankind lived in placid ignorance of the grandeur, vastness, and horror of the Cosmos. Following the cataclysmic events on Earth, the fragile Veil between reality and the Void was shattered and the truth of existence was revealed. As mankind cried to their Gods for salvation, they were torn from Earth by Void torrents and the surviving peoples were scattered among the stars. Countless were lost and mankind seemed all but perished.

Over the decades, the lone survivors, stragglers, and ragged remnants of mankind’s tribes struggled for survival across countless uncaring worlds. However, a few managed to go beyond mere subsistence and traveled the Void currents to find fabled Llyhn, epicenter of the Cosmos. The survivors congregated and created enclaves within the Eternal City—small communities where mankind could survive and start to rebuild all which was lost. You are descendants of the survivors from Earth, the lost cradle of humanity. Llyhn is your home now. Swarming with outlandish life forms, eccentric Daimons, and fickle demigods, it is a swelling cosmopolis of intrigue, wonder, treachery, corruption, beauty, decadence, and eldritch menace. Behind you lie the smoldering ruins of a once-great species trying to reclaim former glory—before you the mysteries of Llyhn and a vast treacherous Cosmos.

Black Void: Those Who Would be Gods. 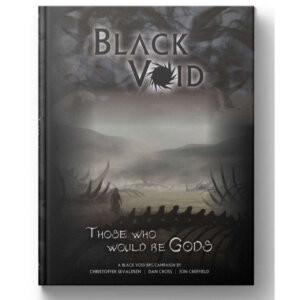 The Qamsa, once mortal Babylonians, were forever changed by their exposure to the Void and otherworldly entities following the cataclysmic events on Earth. Their quest for power was sparked by outrage at mankind’s mistreatment and a desire to find Earth once more.

The abduction of an enclave elder sparks a chain of events that reveals dark furtive ties to the past, rattles the tenuous stability of the Feeradani enclave, and threatens all of mankind. The central themes, species, and locations of the Black Void setting are showcased throughout the campaign to introduce new players to the overall spirit of the game as it takes the protagonists on a harrowing journey through multiple districts of the Eternal city, into the dark and deadly jungles of Llyhn, and across the Void to an ominous border world where those who would be Gods dwell.

The Those Who Would Be Gods campaign is presented in three parts. The plot has linear milestones for characters to achieve, with numerous hooks for the protagonists to follow and sub-plots to further explore if desired. Each part is playable on its own, but they truly come to life when played as a continuing story. The campaign is made for newly created characters but can be adapted to fit characters that have advanced.