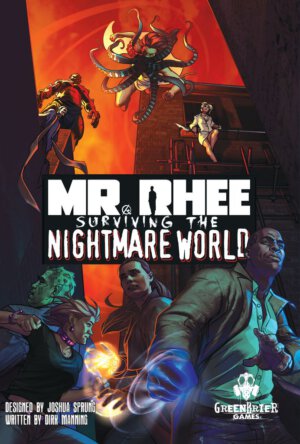 Earlier today Greenbrier Games launched a Kickstarter to bring Mr. Rhee: Surviving the Nightmare World, based on the horror graphic novels of Dirk Manning, to the public. In the game, one player takes on the role of the heroes aiming to protect the innocents as all the other players lead supernatural villains attempting to rain ruin on our world. You can reserve a copy of the game, plus all unlocked stretch goals, for a $40.00 pledge through November 1st with an expected delivery of October 2019.

Catch my Gen Con interview with Greenbrier’s Julie Ahern to learn even more about Mr. Rhee: Surviving the Nightmare World.

Mr. Rhee: Surviving the Nightmare World is a self-contained card game in which players assume the antagonistic roles of Heroes and Villains. Up to 5 players will choose a Villain, each with their own diabolical scheme. One player will take on the role of the Heroes, whose goal is to keep the Villains from achieving their nefarious plans for the 3 days and nights! Beware though; some Heroes have vices of their own that can be exploited by Villains!

Mr. Rhee: Surviving the Nightmare World is 3-6 player “one vs many” card game, where 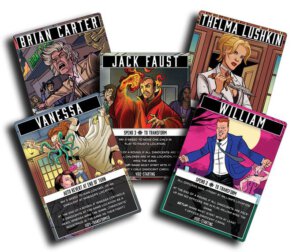 “the one” plays the heroes, and “the many” are the villains.

As a Villain, spend Greed to recruit and deploy your Minions to various Locations across the Nightmare World, or leverage your character specific win conditions to claim victory. Your job as the Hero is to survive for six rounds – the Three Days and Three Nights of Darkness that have fallen across Earth, making it a Nightmare World. Gather Fight, Magic, and Charisma to utilize your team’s unique abilities in order to mitigate damage across the city… and set the Villains at each other’s throats.

Wickedly fun, this game plays in about 30 minutes. Will you take over the Nightmare World, or just survive it?