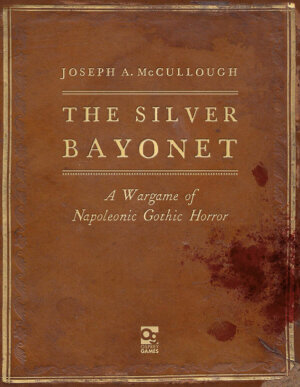 A unique new Napoleonic era skirmish miniatures game is arriving from designer Joseph A. McCullough and Osprey Games. Horse and musket collides with horror in The Silver Bayonet. The 160 page hardcover will carry an MSRP of $35.00, or grab the PDF at DriveThruRPG for $24.50, when it arrives this week.

As the wars of Napoleon ravage Europe, chaos and fear reign and the darkness that once clung to the shadows has been emboldened. Supernatural creatures – vampires, werewolves, ghouls, and worse take advantage of the havoc, striking out at isolated farms, villages, and even military units. Whether they are pursuing some master plan or simply reveling in their newfound freedom is unknown. Most people dismiss reports of these slaughters as the rantings of madmen or the lies of deserters, but a few know better…

The Silver Bayonet is a skirmish wargame of gothic horror set during the Napoleonic Wars. Each player forms an elite band of monster hunters drawn from the ranks of one of the great powers. Riflemen, swordsmen, and engineers fight side-by-side with mystics, occultists, and even those few supernatural creatures that can be controlled or reasoned with enough to make common cause. The game can be played solo, co-operatively, or competitively, with players progressing through a series of interlinked adventures with their soldiers gaining experience and suffering grievous wounds, and their units triumphing… or falling in the face of the shadows. It is a game of action and adventure, where musket and saber meet tooth and claw.