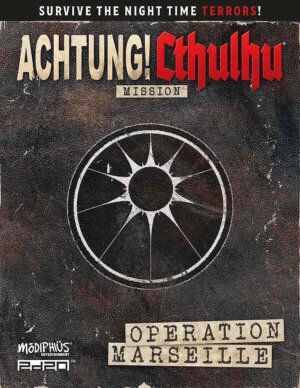 A new adventure has arrived in PDF for Achtung! Cthulhu 2D20 from Modiphius Entertainment. In Operation Marseille, the player characters will find completing a mission in 1941 occupied France is only the beginning to a strange and, possibly, hallucinatory adventure. The 33 page PDF is available right now at DriveThurRPG for $7.00.

Having received intelligence from its Maquis allies in Southern France, Section M drops a team of agents into Vichy-controlled Marseille in the summer of 1941 to disrupt a powerful Black Sun ritual linked to the Dreamlands.

While the mission is a success, at least partially, the agents suddenly find their Resistance contact gone, their escape route compromised, and themselves stranded in night time Marseille with Vichy forces on the alert and Black Sun hunters on their tail.

But that is not their only problem, as things take a decided turn for the weird as they are dogged by strange phenomena and bizarre incidents which transport them from Marseille’s mean streets into a number of surreal hallucinogenic encounters.

Are these incidents real or just hallucinations brought on by some afterimage of the ritual?

And can the agents find a way to shake off these supernatural encounters, escape the Black Sun’s pursuit and cut a deal with the Marseille mob to escape from occupied France before dawn breaks?

Find out in this latest thrilling mission for Achtung! Cthulhu 2d20!