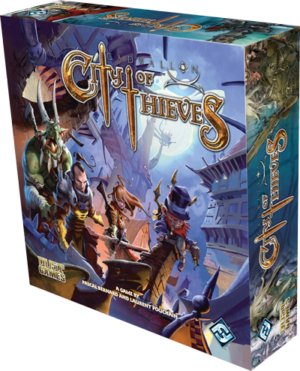 Announcing:  The Inn!  A variant for Cadwallon: City of Thieves just released by Fantasy Flight Games.  You can download this free variant at the FFG Website.    This variant features 9 equipment cards that the thieves can pick up at the inn before their adventure begins, but you’ll have to pay for them later with the loot you collect during the game.

Some of the new cards include:

Blunderbuss – Before attacking or defending, your character rolls one die.  1-4 The fight takes place normally, 5-6 your character automatically wins.

Clever Disguise – No militiamen can attack this character, or enter the space he occupies.

Guild Ledger – Usable only once per game, your character can take one mission card without spending any action points.

These may just give your thief the edge they need to emerge victorious!