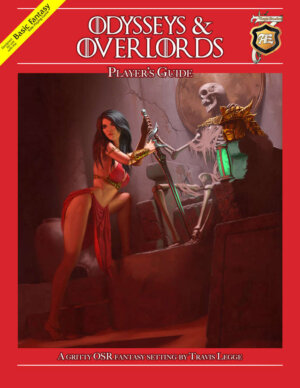 A gritty new fantasy setting, aimed at use with the Basic Fantasy Role-Playing Game, is now available in PDF from Aegis Studios. Currently you can grab the Odysseys & Overlords Player’s Guide for $3.95 and the Game Master’s Guide for the setting for $4.95 through DriveThruRPG.

The mortal lands are divided. A dozen kingdoms lie scattered across the world, separated by dangerous wilds filled with bandits and monsters. The bravest mortals act as adventurers, guiding travelers between the kingdoms, killing monsters to thin their numbers, and plundering ruins in search of the lost treasures of the golden age. This is the world of Odysseys & Overlords!

This book is written specifically for anyone who would like to assume the role of a player in an Odysseys & Overlords game! Within this book you will find the rules and systems that will help you create and play a character to tell stories and go on grand adventures with your Odysseys & Overlords group!

Within this book you will find rules, systems, and monster stat blocks that will help you design and run adventures for your Odysseys & Overlords group!