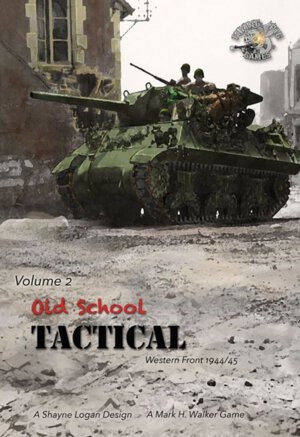 Flying Pig Games has launched a Kickstarter to fund a new print run for the popular WWII wargame Old School Tactical Volume 2. You can find my review right here. The project also includes the OOP Airborne expansion as well as a fresh new expansion, Phantom Division. You can reserve a copy of the core game for a $75.00 pledge and add each of the expansions for $40.00 each through June 4th. The project is fully funded and the expected delivery is this September.

Here’s some bad news. We’ve sold out of Old School Tactical Volume II: West Front 1944-45 and Airborne. The good news is that you can help us fund the reprint, and pick up some cool add-ons and stretch goals along the way.

This volume of the straightforward, yet challengingly immersive, tactical game introduces the Americans to the series. Fight across the European countryside with M-10/18/36 tank destroyers, Stuart light tanks, and M-8 armored cars. Battle Tiger tanks with your own version of Fury, the Sherman Easy-eight commanded by Wardaddy, or challenge the American’s invasion of your homeland with King Tiger’s, Jagdpanthers, the vaunted MG-42 and more.  Maneuver squads and leaders and snipers to outfox your opponent. Find your enemy, fix them, flank them, and finish them. If it works on the battlefield it works in Old School Tactical, and it works with minimal fuss and muss AND Old School Tactical has less than half the rule pages of other popular tactical games.

But wait a minute. That’s not all.

We’re also reprinting the Airborne expansion pack that was so popular. A boxed expansion that includes another beautiful 31″ x 41″ mounted map board, 90 counters, and 6 scenarios depicting actions by the Screaming Eagles of the 101st Airborne and the All-Americans of the 82nd Airborne Division. The scenarios focus on the the divisions’ D-Day drop and the fighting in the ensuing handful of days. New units include paratroopers and C-47 transport planes.

The 9th Armored (Phantom Division) fought in the Battle of the Bulge, captured the Ludendorff Bridge at Remagen, Germany, and assisted in the encirclement of the Ruhr. Phantom Division includes 3 pocket-battle sized maps (approximately 11″ x 17″), each printed front and back, new counters, such as the M-26 Pershing, M-24 Chaffee, and M1919A6 machine gun, and 6 new scenarios, designed by Mark Walker. All of this fits nicely in a 10″ x 12″ x 1.5″ box.  If you are interested in getting Phantom Division just add $40 ($10 OFF THE RETAIL PRICE) to your pledge, and choose the Phantom Division expansion in the pledge manager after the campaign finishes.