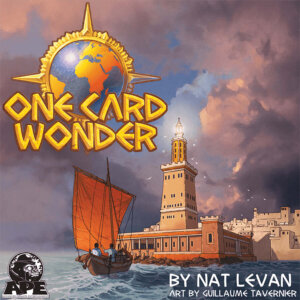 An interesting looking ancient history game is arriving from APE Games at Gen Con. In One Card Wonder, players will be tasked with completing a historical wonder before their opponents. The game is for two to six players, ages 8+, plays in around 20 to 30 minutes, and will carry an MSRP of $30.00.

In One Card Wonder, each player receives a card that shows a wonder of the ancient world and a set of support buildings. The multiple stages of the wonder must be built from the ground up, while the buildings may be built in any order. Players have four worker meeples and a personal supply of resources, and a general supply of resources also exists. The resource supply bag moves from player to player to indicate who is the active player.

On a turn, you take one of four actions. You may draw three cubes from the cloth supply bag, then add two to your personal supply, placing the other one in the general supply. You may take all resources of one type from the general supply. (You may hold only eight resources at a time in your supply, so if after drawing or taking you have more than eight resources, you must return some to the general supply.) You may build a level of the wonder or a building by paying its resource cost from your supply; your workers mark individual buildings as you build them, unlocking abilities. Finally, you may sell pairs of matching goods to the supply in exchange for coins. Coins can be used as a wild resource, but they also appear in the cost of some wonders. Resources sold or used to build are returned to the supply bag.

In games of four or more players, players may also trade. Trading occurs off-turn, that is, it can involve anyone except the active player. You may negotiate and trade freely with other players, but you must stop negotiating once you receive the supply bag and become the active player. The longer you spend on your turn, the more opportunity your opponents have to make deals.

The first player to complete their wonder wins!