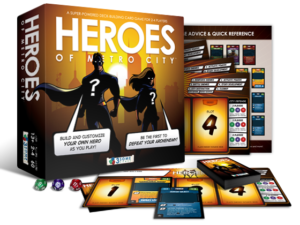 Fans of comic book inspired games should most likely take a look at Heroes of Metro City currently running on Kickstarter. 3Some Games (amazingly I’m not going to touch that one with a joke…) promises a unique deck building experience in this card game where the players look to bring down a super villain bent on nefarious plans! Currently the project is 76% funded and will draw to a close September 15th.

Each player represents a super-powered Hero of their own design who must stop their Archenemy’s nefarious plan to destroy Metro City. To succeed, the Heroes must do battle with hordes of Minions, diabolical Villains, and the Archenemy who leads them! The more Energy and Powers a Hero develops, the closer they get to defeating their Archenemy. But time is running out! For every moment the Heroes delay, the forces of evil destroy more of the city the Heroes are trying to save.

DEFEAT YOUR ARCHENEMY! The first player to defeat the Archenemy wins the game… unless the Archenemy destroys so much of Metro City that there’s nothing left to save!

CUSTOMIZE. DEVELOP. REPLAY. Devastate your enemies with thousands of possibilities and choices for your character.  The base game includes over 20 explosive Power cards and many iconic Energy Sources.  A randomized subset of these will be selected for each game. It’s an exciting array of possibilities for your customized super-powered Hero.

TELL A STORY. In Heroes of Metro City, we encourage our players to name their Heroes and describe the action as they play their cards. No, it’s not required, but it sure is a lot more fun. Instead of just playing five or six cards onto your Hero Placard, we think it’s a lot more fun to play those cards while saying, “My Hero, The Phantom Panther, is avoiding Ella Moondust’s gaze attack by shadow-teleporting directly behind her. Before she can turn around, he unleashes a flurry of kicks combined with slashes from the deadly bladed claws that his mutation created. Ella Moondust has been defeated, and will not trouble Metro City again.”

Heroes of Metro City uses dynamic deck-building combined with our unique Energy Source slots to create a power management mechanic (using your Hero Placard) that lets you decide which powers and abilities are most important for each turn (see below). The Hero Placard also helps to guide you through the six action-packed phases of each turn.

Want to consistently draw more cards? Develop lots of Travel Powers like Supersonic Flight or the Armed Super-Vehicle. Want to deal massive damage from afar? Nuke your enemies with an Elemental Blast or snipe them with a Long-Distance Shot. Want to dazzle your foes with strange abilities from another world? Use an Ensnaring Ambush, Weather Control or the deadly Mind Spike to dominate your enemy. Developing more than one copy of the same card and adding it to your deck means you’ll draw that Power from your Hero Deck more frequently on your turns. For instance, if you have three copies of Impenetrable Skin in your deck, bad guys won’t often be getting past you!