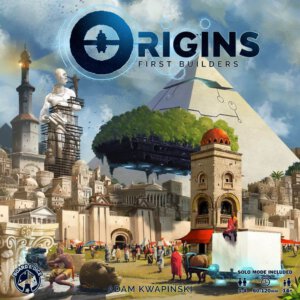 This summer will see the release of a new game from Board & Dice. In Origins: The First Builders, designed by Adam Kwapiński, players will construct ancient cities with the aid of alien benefactors. The game is for two to four players, ages 14+, and plays in one to two hours. No word yet on an MSRP yet.

They came to this planet, and they chose you. They uplifted your people and promised great prosperity. They provided the wisdom and the resources to build your cities sky high. They taught you the ways of culture, science, and warfare. They promised knowledge for any willing to learn. Come, Archon, guide your citizens to victory, under the watchful eyes of the Builders, our benefactors from beyond the skies above.

In Origins: First Builders, you are an archon, guiding a population of freemen, influencing the construction of buildings and monuments, climbing the three mighty zodiac temples, and taking part in an arms race — all in an effort to leave the greatest mark on mankind’s ancient history.

You start the game with a city consisting of just two building tiles: the Agora tile and the Palace tile. As the game develops, your city will grow in both size and strength as you add new building tiles, each of which has a special ability that triggers when it is first added to a city and when closing a district.