Earlier today Pandasaurus Games launched a Kickstarter to bring two new games to the public. Both Dinosaur World and Dinosaur Island: Rawr ‘n Write are part of the game company’s Dinoverse. The project smashed past it’s funding goal in minutes and you can reserve a copy of Dinosaur World for a $70.00 pledge, Dinosaur Island: Rawr ‘n Write for a $30.00 pledge, or score both for a $95.00 pledge through October 16th. Expected delivery is July 2020. 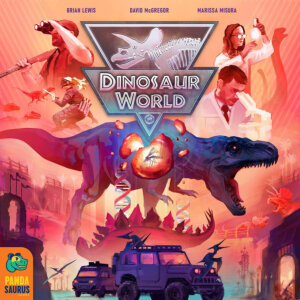 Introducing… Dinosaur World. ­­­­­­­­­­­­ Chaotic throngs of amusement park adrenaline junkies and crafty hoodlums have long been silent. The dream of billion dollar dinosaur theme parks came crashing to a halt after waves of class action lawsuits pushed the likes of Lewis Leviathan and PandaGen into bankruptcy and permanent closures. As the technicolor dreams of the ‘90s crested into a new decade, so too did our fair dinosaur theme parks.

It’s now the early aughts, ipods on everybody, and the world is ready for a new set of upstarts and young entrepreneurs. These wide-eyed and bushy-tailed companies are eager to bring dinosaurs back to the world once again. This time without the pesky issues of consistent and ever-enumerating fatalities like the parks of old. It’s up to you, our new park leaders, to create a world so toxically fun and enticing that the entire world will line up to get inside.

The new Dinosaur World is an archipelago of stunning islands. Directors must arrange them in the best path for your spiffy, new park jeeps to plunder the depths of fun. Create brand new dinosaurs from DNA slices, visit new attractions that make the Clever Grill seem like a distant eye roll.

In Dinosaur World, where and how you layout your park matters. You’ll build routes for Jeeps to drive on and will want to hire the correct worker type for the attractions your Jeep visits. This is a whole new park and a completely different experience. Route building, program movement, adjacency bonuses for buildings that make sense next to each other and, of course, tons of new Dinosaur types. But please make sure and stay true to your promise to keep fatalities at bay. You know what happened to the last owners. We wouldn’t want that to happen to a bright mind like yourself!

Dinosaur World is for two to four players, ages 10+, and plays in one to two hours. 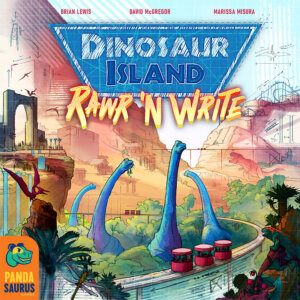 In the tradition of Duelosaur Island, we would be remiss if we failed to deliver double the Dino Island universe fun and fatalities. Enter Dinosaur Island: Rawr ‘n Write. Experienced roll-and-write fans, and newbies to the genre, are in for a galactic treat with the first ever roll-and-write set in the bustling chaos of Dinosaur Island – glistening in all of its ‘90s glory!

If you were expecting a 20-minute-long, throw away game for between titles, look elsewhere! This game packs a big punch. It’s a meaty roll-and-write, more similar to games like Ganz Schön Clever, that players can really dig into.

Dinosaur Island: Rawr ‘n Write is a unique game in which players draft dice and then use those drafted dice as workers in a worker placement phase. Then, a fun polyomino puzzle ensues as you try and fit all your attractions and Dinosaurs into your park while buildings roads and routes to the exits for bonus points.

You are still making Dinosaurs, hiring specialists, and trying to create the most exciting park as you can (keeping it moderately safe, at least). Each game the specialists available to hire will be different, as will the special buildings that you can fit into your park. This means 100% of the games will be completely unique and different, allowing for infinite replayability.