Paizo Inc is hard at work with new releases for Pathfinder and Starfinder arriving in February 2020. The month even includes four exciting adventure supplements. All of these items should arrive at your FLGS on February 26th. 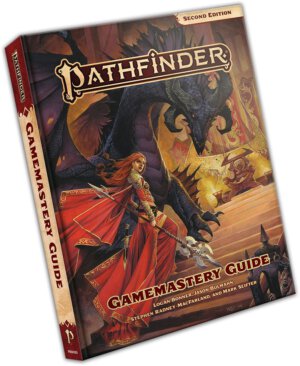 Whether you are a new Game Master or experienced storyteller, you can always find new ways to hone your craft. This 256-page Pathfinder Second Edition rulebook contains a wealth of new information, tools, and rules systems to add to your game. Inside you will find handy advice for building your own adventures, designing towns, and creating vibrant characters alongside rules systems for dramatic chases, thrilling tournaments, and deadly duels. This book also includes more 40 pages of sample nonplayer characters, from the simple town guard to the vile cultist, presented to make your job as GM that much easier! 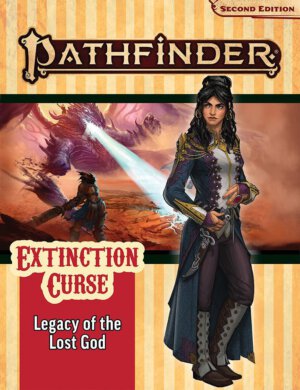 The heroes bring their Circus of Wayward Wonders to the city of Escadar to capitalize on their newfound fame and skills. But old enemies lurk in the city, including the cruel Mistress Dusklight and her Celestial Menagerie. Investigating the looming xulgath threat in a shuttered temple to Aroden, the dead god of humanity, the heroes learn that all their foes are working together. The revelation forces them to enter the Celestial Menagerie to bring the evil ringmaster to justice.

“Legacy of the Lost God” is a Pathfinder adventure for four 5th-level characters. This adventure continues the Extinction Curse Adventure Path, a six-part, monthly campaign in which the heroes lead a traveling circus as they unravel a plot to eradicate all life from the islands of the Inner Sea. This adventure also includes information about catfolk of Golarion and the villainous xulgaths, as well as new monsters and circus-themed rules.

Delve into ancient secrets below the City at the Center of the World in this deluxe campaign-arc adventure for Pathfinder Second Edition! Captured and enslaved by a duergar clan somewhere in the maze of tunnels below the city of Absalom, the heroes stage a bloody revolt and battle their way into the long-lost Sanctum of Aroden, a legendary religious refuge sealed away from the world with the god’s death a century ago. But some secrets are best left buried forever, and investigation into the mysterious Dead God’s Hand said to be hidden at the heart of the complex—and the shrouded figure whose desire for it triggered the heroes’ captivity in the first place—uncovers machinations that could threaten all of Absalom with the birth of a terrible new divinity!

Based on Pathfinder Publisher Erik Mona’s multi-year, multi-group office Pathfinder campaign, The Dead God’s Hand takes new players and Game Masters on a deadly adventure filled with dungeon exploration, ancient mysteries, and phantasmagoric tests that see them reliving events from the life of Aroden, the dead god of humanity whose murder triggered the beginning of the current age! This 128-page hardcover adventure is designed for 1st-level characters and serves as an excellent starting point to future adventures set in Absalom, the City at the Center of the World!

Bring your Dead God’s Hand adventures to life on your tabletop with this pair of double-sided full-color Flip-Mats featuring key encounter locations from the Pathfinder Second Edition deluxe adventure on either side! Two sides depict the sprawling compound of the evil dwarf Clan Orthux, where the heroes begin the adventure as captives. Another side features the bloody tomb of a great church patriarch in the long-lost Sanctum of Aroden, while another depicts the famous throne room of the Ancient Azlanti Empire, mere minutes before the planetary cataclysm of Earthfall!

This set includes two Flip-Mats, each measuring 24″×30″ unfolded and 8″×10″ folded. A special coating on each Flip-Mat allows you to use wet-erase, dry-erase, and permanent markers with ease! Removing permanent ink is easy—simply trace over any permanent mark with a dry-erase marker, wait 10 seconds, and then wipe off both marks with a dry cloth or paper towel. 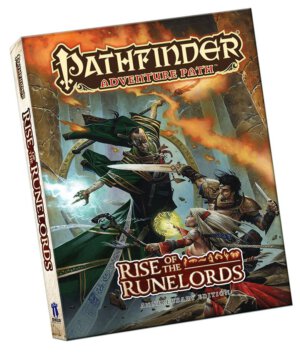 Pathfinder’s classic first Adventure Path campaign is now available in softcover! In the sleepy coastal town of Sandpoint, evil is brewing. An attack by crazed goblins reveals the shadows of a forgotten past returning to threaten the town—and perhaps all of Varisia. The Rise of the Runelords Adventure Path begins with this goblin raid and takes players on an epic journey through the land of Varisia as they track a cult of serial killers, fight backwoods ogres, stop an advancing army of stone giants, delve into ancient dungeons, and finally face off against a wizard-king in his ancient mountaintop city. This hardcover compilation updates the fan-favorite campaign to the original Pathfinder Roleplaying Game rules with revised and new content in more than 400 pages packed with mayhem, excitement, and adventure!

Revised and updated 5 years after its original publication, this new edition expands the original campaign with new options and refined encounters throughout, incorporating years of community feedback! 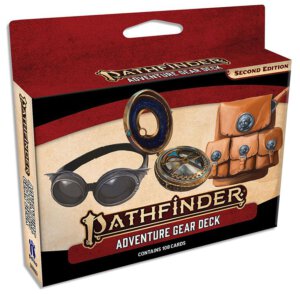 Adventuring is dangerous business, and those who wander into long forgotten dungeons or into trackless swamps without the right preparation are doomed to failure. With this 110-card deck of vital adventuring gear, you don’t have to worry about forgetting to bring the right piece of equipment ever again. Each card features a beautiful illustration of the item on one side, with all of the rules for play located on the back. Every piece of gear in the Pathfinder Second Edition Core Rulebook is here in this deck, from backpacks and torches or mirrors and waterskins, each listing its price and bulk for ease of reference. Sorting through your gear has never been easier! 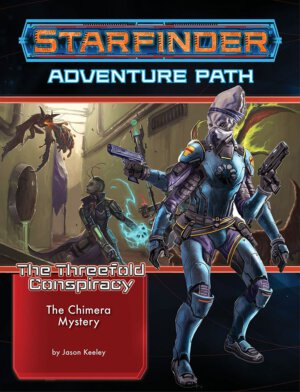 Starfinder Adventure Path: The Chimera Mystery (The Threefold Conspiracy 1 of 6)

The security officer aboard a luxury space liner, the Chimera, goes missing after the heroes witness her arguing with a passenger. Soon after, the Chimera’s engines fail and defy repair. A scholarly patron asks the heroes to investigate the disappearance, which involves murder, misdirection, and misapprehension. To unravel the murder mystery around them, the heroes must follow clues about more than one enigma aboard the Chimera. Secrets and unexpected foes abound. In the end, the investigators find that the whole whodunit is only part of a much larger conspiracy!

“The Chimera Mystery” is a Starfinder Roleplaying Game adventure for four 1st-level characters. This adventure begins the Threefold Conspiracy Adventure Path, a six-part, monthly campaign in which the heroes unravel the machinations of insidious aliens who have infiltrated galactic society. This volume also includes an article on running mystery scenarios, more on spies in the Pact Worlds and beyond, and a selection of new alien creatures! 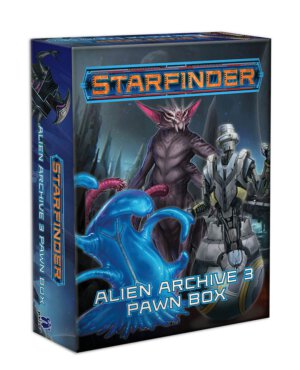 The galactic threats of Starfinder Alien Archive 3 come alive on your tabletop with this box-busting collection of more than 300 creature pawns for use with the Starfinder Roleplaying Game or any tabletop science-fantasy RPG! Printed on sturdy cardstock, each pawn contains a beautiful full-color image of an alien from the Starfinder RPG’s third collection of interplanetary threats and unique player character races. Each cardboard pawn slots into a size-appropriate plastic base, making it easy to mix with traditional metal or plastic miniatures. With multiple pawns for commonly encountered creatures and a handful of new foes to fight in starship combat, the Starfinder Alien Archive 3 Pawn Box is the best way to ensure you’ve got the perfect characters to bring your Starfinder campaign to life!