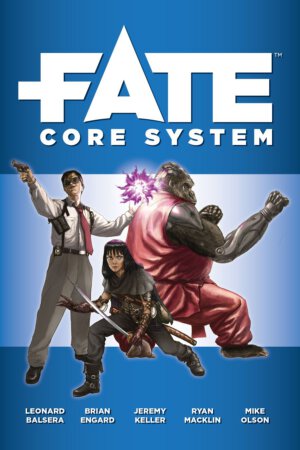 Evil Hat Productions is making the Fate Core Rule Set and Fate Accelerated PDFs available in a “pay what you’d like” system with a minimum price point of $5 and $2.50 respectively. From my understanding the Fate rules are based in part on the old FUDGE system and I’m interested in delving a bit deeper into these two new releases so you can look forward to reviews on both books in the very near future.

Grab your plasma rifles, spell components, and jetpacks! Name your game; Fate Core is the foundation that can make it happen. Fate Core is a flexible system that can support whatever worlds you dream up. Have you always wanted to play a post-apocalyptic spaghetti western with tentacle monsters? Swords and sorcery in space? Wish there was a game based on your favorite series of books, film, or television, but it never happened? Fate Core is your answer.

Fate Core is a tabletop roleplaying game about proactive, capable people who lead dramatic lives. The type of drama they experience is up to you. But wherever they go, you can expect a fun storytelling experience full of twists…of fate.

Score Big Savings with the Atomic Robo Bundle of Holding

Minimum price point is free, actually, but the $5/$2.50 minimums are what we’re trying out for our webstore. Folks can donate whatever they want via the button on http://www.faterpg.com as well.

Thanks for clearing that up Fred. I thought maybe the free download was a limited time thing since I saw the pricing of $2.50/$5 on both DriveThruRPG and the Evil Hat site. Let’s hope people don’t just go for free though! 🙂