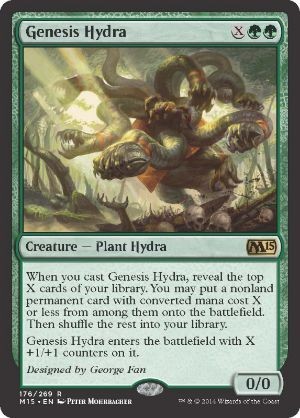 Lots of folks are excited about the upcoming release of the Magic: The Gathering 2015 Core Set and it’s been announced quite a few new cards are being designed by some luminaries of the gaming world.

The scoop from Wizards of the Coast:

As if there isn’t already enough excitement around the upcoming release of Magic 2015, Wizards of the Coast has announced that the set will feature fourteen cards from some of the world’s most renowned game developers! The Magic 2015 – Core Set releases July 18, 2014.

The announcement was made at PAX East with George Fan, designer of Plants vs Zombies, revealing the card he designed, Genesis Hydra.

The developers who contributed their card ideas for Magic 2015 include: