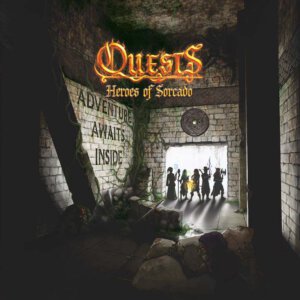 SolarFlare Games has launched new fantasy game on Kickstarter. QUESTS: Heroes of Sorcado includes eight cooperative adventures as players battle monsters while gathering magic, gear, and treasure. The game is for one to six players, ages 13+, and plays in around two hours. The project is closing in on it’s funding goal and you can reserve a copy of the game, plus all unlocked stretch goals, for a $59.00 pledge through June 15th. Expected delivery is next January.

Welcome to Quests: Heroes of Sorcado, an epic fantasy cooperative campaign for 1-6 players.  In each of eight adventures (plus a bonus training adventure) you’ll build your character, acquiring powerful spells and weapons, increase your abilities by defeating monsters and evading traps, and forge your path through choice-driven events, story moments, and side quests.

Add up your Hero’s character, weapon, and magic bonuses, and roll dice for damage against fearsome foes, with each Adventure culminating in a boss fight that will require all your best items, potions, abilities, and a bit of luck.  With a 60+ page campaign story and 140+ pages of additional story events and choices, players can immerse themselves in a world beset by a demon lord bent on total destruction.  Choose your destiny, hone your weapons, and find out if you have what it takes to save Sorcado from utter destruction at the hands of the Dark Lord.