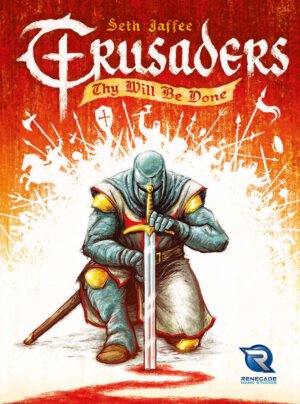 Currently Renegade Game Studios is taking preorders for a new print run of Seth Jaffee’s Crusaders: Thy Will Be Done. In the game, players take the leadership of rival knightly orders as each aims for wealth and influence throughout Europe. Crusaders: Thy Will Be Done is for two to four players, ages 14+, and plays in around 40 to 60 minutes. The standard edition will carry an MSRP of $60.00 and the deluxe edition’s MSRP is $100.00. These are set for a Q3 release.

Move your knights, erect buildings, and go crusading to spread the influence of your Order. When the Orders get too strong, King Philip will become nervous and disband all Templar orders, ending the game.

Crusaders: Thy Will Be Done uses a combination of rondel and mancala mechanisms. Each player has their own rondel, which they can upgrade over the course of the game, that controls their action choices during the game. Your faction gives you a special power to control your rondel, and the buildings you erect will help you form a strategy.

Hunter: The Reckoning 5E is Out in Print and PDF