Cryptozoic Entertainment has announced two new games based on the animated Cartoon Network Adult Swim series Rick and Morty. The first, Rick and Morty: Anatomy Park Game, is a board game where Morty is shrunk down to save a microscopic amusement park from a variety of diseases. The second offering, Rick and Morty: Close Rick-Counters of the Rick Kind Deck-Building Game, is an alternate reality mash-up featuring evil Ricks and Morties. Both games are based on episodes of the hit show’s first season.

Rick and Morty: Anatomy Park Game is set for a July release while Rick and Morty: Close Rick-Counters of the Rick Kind Deck-Building Game should arrive in stores in Q4 of 2017.

Cryptozoic Entertainment, leading creator of board games, trading cards, and collectibles, and Cartoon Network Enterprises today announced that they are working together on two new tabletop games based on episodes of the popular Adult Swim Rick and Morty animated TV series: Rick and Morty: Anatomy Park Game and Rick and Morty: Close Rick-Counters of the Rick Kind Deck-Building Game. Being prepared for 2017 releases, both games can be previewed at New York Toy Fair until February 21 inside Cryptozoic’s booth (#5350), which can be found on Level 1 of the Jacob K. Javits Convention Center. 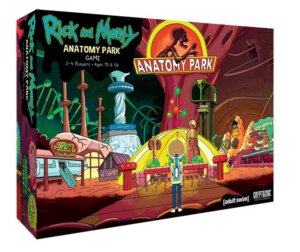 Rick and Morty: Anatomy Park Game is based on the first season episode “Anatomy Park,” in which Rick shrinks Morty and sends him into the body of Ruben, a homeless man in a Santa suit. It turns out that, in a joint venture with an eccentric and well-funded amoeba, Rick has built a microscopic amusement park inside a human body that will make them rich beyond their wildest dreams. Morty’s mission is to save the very strange park before it is overrun by the diseases that are running rampant.

The strategy game puts 2-4 players into Anatomy Park, deep inside of Ruben’s body. After choosing from six characters, players must design the best park possible by placing tiles while simultaneously avoiding and fighting Diseases, such as Tuberculosis and Hepatitis A. Certain actions (e.g., moving Ride Tiles around) shift around Ruben’s internal organs during gameplay and cause players to draw Bodily Reaction Cards, which result in unexpected effects and force players to act out embarrassing bodily functions. There are multiple game-ending conditions in which Ruben can live or die, affecting players and their final scores in various ways. 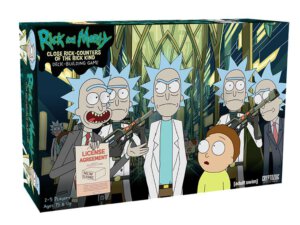 Rick and Morty: Close Rick-Counters of the Rick Kind Deck-Building Game is based on the Season 1 episode “Close Rick-Counters of the Rick Kind,” in which a group of Ricks from alternate realities arrive and accuse the show’s Rick of murdering other Ricks. After being taken to the Council of Ricks, Rick and Morty escape to track down the evil Rick who appears to be the one behind the murders and the kidnapping of numerous Mortys. However, the true motivations and identity of the villain turn out to be much more complicated.

The deck-building game uses Cryptozoic’s popular Cerberus Engine as various versions of Rick serve as both players’ oversized Hero cards and the Villainous Council of Ricks. Each player’s deck starts with the following cards: seven Genius Waves cards that give you Power, one Beth, one Jerry, and one Summer. The Beth, Jerry, and Summer cards do nothing, but can activate other cards. The “Kick” stack in other Cerberus games is now the Portal Gun stack. The Portal Gun activates the Portal deck, which transports a player’s Hero to a random Location from the episode or other popular places from the series. That player may then utilize that Location during his or her turn and has the option of paying the cost of the Location to put it into his/her deck.