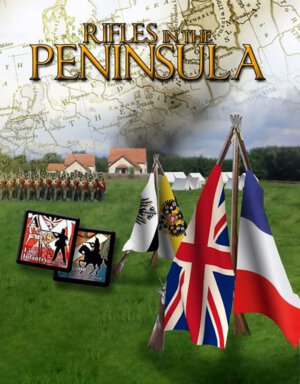 Gottardo Zancani’s solitaire Rifles wargame system is about to travel back to the 19th century in the latest preorder from Tiny Battle Publishing. Rifles in the Peninsula brings the skirmish action into the Napoleonic Wars and even includes a dueling mini-game. The game is for one player, ages 14+, plays in 60 to 120 minutes, and carries a preorder price of $32.00. Expect shipment in December.

“There are only two forces in the World, the sword and the spirit. In the long run the sword will always be conquered by the spirit.” – Napoleon Bonaparte

RIFLES IN THE PENINSULA IS THE THIRD GAME OF GOTTARDO ZANCANI’S SOLITAIRE RIFLES SERIES, WHICH ALSO INCLUDES RIFLES IN THE PACIFIC AND RIFLES IN THE ARDENNES. THE FOCUS OF THIS NEW TITLE IS ON THE NAPOLEONIC WARS (1799-1815).

The RIFLES system allows the recreation of small combat engagements (five to ten units per side), using an abstract map that represents the main features of the terrain like trees, buildings, hills. Placement of terrain features is guided but is never the same on each game, always creating new tactical challenges. The enemy strategy and the fog of war is recreated with the use of random Event Markers and “Activation Tables” that drive the enemy units toward their 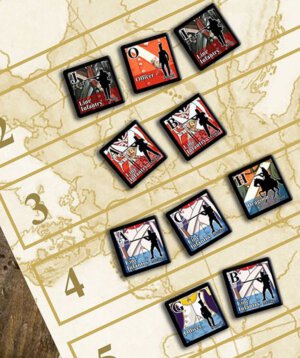 Rifles in the Peninsula introduces new rules to cover unique aspects of the Napoleonic Wars including mounted troops, formations, and the impact of the longer reload time of the weapons of the period (pistols, muskets, and rifles). The different attributes of the units (combat factors, quality, special traits) grenadiers, voltigeurs, cuirassiers and dragoons.

The Campaign game has been greatly redesigned and is now based on the timeline of the main campaigns of the period. The new Glory Track will represent the career of the Leader of your units, your avatar in the game, and your rank will have a direct influence on the game. Each year of the campaign includes four to six main “scenes”: a scene can trigger one Mission on the battlefield or a Campaign Event. Twelve different Missions are available, covering classical military duties like reconnaissance as well as iconic battle episodes like the capture of a gun. Campaign Events are resolved without the need to setup the battlefield and cover episodes like barrack inspections, field maneuvers and of course duels. As a bonus, an optional mini-game The Duel (inspired by the movie, The Duelists)has been included in the package: this mini-game allows players to re-create a saber duel with a more personal perspective, providing an additional level of immersion in the historical period.

From thundering muskets, to rattle of sabers, Rifles in the Peninsula vividly recreates Napoleonic skirmishes like never before.