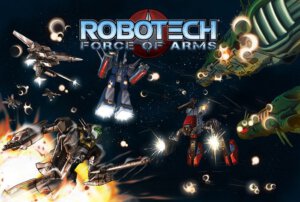 Coming to our galaxy in June 2018 is Robotech: Force of Arms from SolarFlare Games. That’s right the hit 1980’s anime is receiving the card game treatment. Release date, pricing, and in depth details about the game are pretty sketchy right now but I dobelieve this is going to be aimed at two players. Of course, once more info becomes available I’ll be bringing it to you.From SolarFlare:

Robotech: Force of Arms is a card game in which you take on the role of either the brave Robotech Defense Force (RDF) or the warrior like Zentraedi. You and your opponent maneuver your fleets and launch your attack and defense forces trying to defeat the enemy’s ships. Using heroes and distinctive commands at the right time can turn the tide of the battle in your favor.

Are you ready to defend Earth as the valiant Robotech Defense Forces or capture Earth and the SDF-1 as the giant warlike Zentraedi, with a Force of Arms? 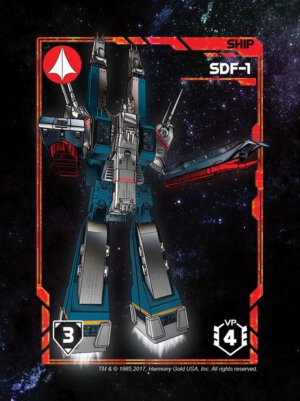 Robotech: Force of Arms is a Tactical Game of fleet movement and area control. You will assume command of either the RDF or Zentradi fleet. On your turn, you will move on of your capital ships, either into the open spot on the board or switching its location with another ship. Then you will look at your fighters who have either a defense or attack value and play 2 of them face down on your sides of the board, with their attack or defensive influence extending across the whole of the adjacent row or column. Attack fighters are used to destroy your opponent’s ships and do not affect yours. Defensive fighters defend your ships and have no effect on your opponent. Some of the fighters provide bonus tokens if played face up.

After all the cards have been played, you and your opponent will alternate playing your tokens adding attack or defense to your ships. Then we will enter the phase we call the hero and command phase. The person who had been going second will become the first player. Then you and your opponent will alternate playing cards and executing their effect from your hero and command cards, until you have both played 1 hero and 2 commands. You will then determine what ships you have saved (your defensive strength vs your opponent’s attack) or destroyed (your attack strength vs your opponent’s defense). Tied ships are not scored. Add up the vp of all the ships you have saved/destroyed. Player with the highest total wins