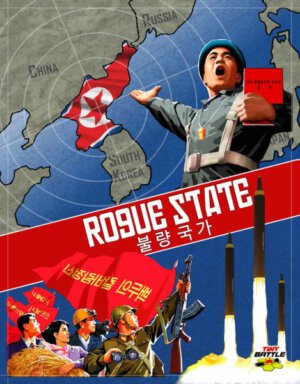 A solitaire game which firmly places you at the head of the North Korean regime is now available for pre-order from Tiny Battle Publishing. In Rogue State, the player will be tasked with leading the Democratic People’s Republic of Korea across a period spanning more than seventy years. You can place your order right now and reserve a copy for $30.00 with the game to ship very shortly.

“Everything is decided by a person’s thoughts and if he is ideologically motivated, there is nothing he cannot do.” – Kim Il-Sung

Rogue State is a solitaire geopolitical conflict simulation where the player assumes the role of the Supreme Leader of the Democratic People’s Republic of Korea (DPRK) immediately after the end of the Korean War.  Your primary objective will be for your regime to survive from 1953 through the year 2030. Your secondary objective will be to maximize adherence to the Juche ideology by progressively achieving national self-reliance and global influence. Juche points are earned by advancing your nation’s military strength, industrial production, nuclear weapons development, and assertively responding to events while minimizing lingering foreign debt.  Victory over your imperialist oppressors will require you to carefully manage scarce resources, strategically evaluate risk, and develop a keen awareness of the interaction between the world situation and your decisions.  Each turn represents approximately seven 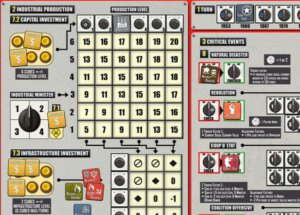 years on the timeline of the DPRK.

As Supreme Leader of North Korea, you will be responsible for:

Do you have what it takes to lead your nation to power and prosperity?