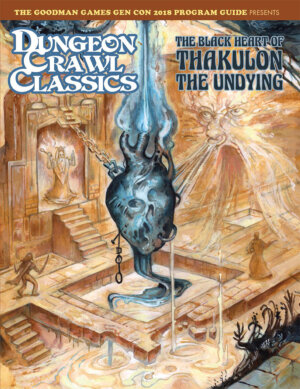 A new Bundle of Holding has arrived to save you big on RPG goodness. This time around Dungeon Crawl Classics from Goodman Games is the featured roleplaying game and you can get aboard starting at $14.95. You can score these savings through May 10th and ten percent of your payment (after payment gateway fees) for this offer will be donated to the charity designated by DCC RPG designer Joseph Goodman, the San Francisco-Marin Food Bank.

Adventurer! This all-new Dungeon Crawl Classics Bundle brings you the Dungeon Crawl Classics Roleplaying Game from Goodman Games. DCC captures the glory days of tabletop fantasy roleplaying with modern fast-playing rules grounded in the origins of sword & sorcery. This bargain-priced offer presents .PDF ebooks of the comprehensive DCC rulebook and an array of modules that carry your characters from the Starless Sea to the Cannibal Kingdom and beyond the Black Gate.

For just US$14.95 you get all four titles in this offer’s Starter Collection (retail value $52) as DRM-free .PDF ebooks, including the complete 506-page DCC RPG rulebook, the Gen Con tournament module The Black Heart of Thakulon the Undying, the introductory “funnel” scenario Sailors on the Starless Sea, and the DCC Judge’s Screen.

And if you pay more than this offer’s threshold price of $29.97, you’ll level up and also get this offer’s entire Bonus Collection with six complete modules (for character levels 1-6) worth an additional $42, including The Queen of Elfland’s Son, Moon-Slaves of the Cannibal Kingdom, The Star Wound of Abaddon, Emirikol Was Framed, Beyond the Black Gate, and Imprisoned in the God-Skull.