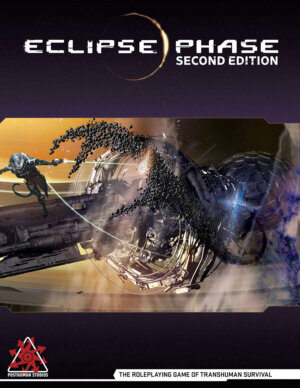 Bundle of Holding is currently featuring the second edition of transhumanist SF roleplaying game Eclipse Phase, published by Posthuman Studios. You can score the entire bundle for $14.95. These savings run through August 3rd and ten percent of your payment (after gateway fees) will be donated to this Eclipse Phase offer’s pandemic-related charity, Direct Relief.

Agent! This all-new Eclipse Phase 2E Bundle presents the 2019 Second Edition of Eclipse Phase, the tabletop science fiction roleplaying game of transhuman survival from Posthuman Studios. After losing Earth in a war with AIs, transhumanity disperses throughout the Solar System and beyond, struggling to survive. In a typical Eclipse Phase game, characters belong to Firewall, a secret cross-faction organization that protects transhumanity from biowar plagues, self-replicating nanoswarms, nuclear proliferation, terrorists with WMDs, net-breaking computer attacks, rogue AIs, alien encounters, and anything else that could drive an already decimated transhumanity to extinction. Agents may even step through a Pandora Gate, a wormhole to distant stars and the alien secrets beyond.

For just US$14.95 you get all eight titles in our Eclipse Collection (retail value $54) as DRM-free ebooks, including the complete Eclipse Phase 2E corebook, plus the free QuickStart Rules, Rules Primer, and Character Pack; three 2E adventures – Router Case Files, Xenovore, and Overrun; and four “Nano Ops” two-page mini-scenarios: All That Glitters, Better on the Inside, Body Count, and Grinder.

Score Big Savings with the Legacy: Life Among the Ruins Bundle of Holding