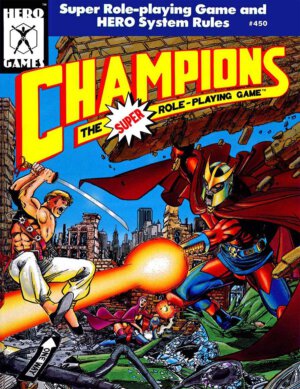 Two new offers at Bundle of Holding are providing the ENTIRE fourth edition run of the classic superhero roleplaying game Champions, from HERO Games, for a song. Included are over 60 gaming PDFs bringing you everything you’d need for years and years of supers adventures and you can get started for $14.95. The savings run through June 1 and ten percent of your payment (after gateway fees) will be donated to these two Champions offers’ pandemic-related charity, Heart to Heart International.

It’s back! From April 2017, this revived Champions 4E Essentials offer (first of two revivals now in progress) brings you nearly thirty all-new tabletop roleplaying .PDF rulebooks, supplements, and adventures from the nigh-lengendary Fourth Edition (1989-2001) of Champions, The Super Roleplaying Game from Hero Games. Starting in 1989 with the giant Champions 4E core rulebook (“The Big Blue Book”), dozens of Fourth Edition titles defined and developed the superhero setting later seen in the 2009 Champions Online MMORPG and in the Fifth and Sixth Editions we’ve offered in the past. These two offers’ original April 2017 run marked the debut of these lively and imaginative 4E books in .PDF — and if you missed them then, now you have a new chance to join the fight for justice.

This revival’s jaw-dropping Core Collection gives you over 1,900 pages of top-quality superheroic roleplaying material — thirteen DRM-free .PDF ebooks (retail value $97.50) — for just US$14.95! The 354-page Big Blue Book itself and the Hero System Rulesbook, plus Classic Enemies and Organizations, PRIMUS and VIPER, Normals Unbound and Allies, the Hero Bestiary, and more: With just these books, Champions Gamemasters have run campaigns lasting decades. AND THAT’S JUST THE START. 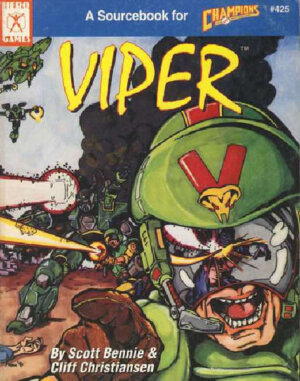 If you pay more than the threshold price of $31.49, you’ll level up and also get this offer’s entire Bonus Collection with fifteen more titles worth an additional $105, including Dark Champions: Heroes of Vengeance for 4E, Golden Age Champions, the 4E versions of Ultimate Martial Artist and Ultimate Mentalist, The Ultimate Super Mage and Super Mage Bestiary (plus Mystic Masters), Challenges for Champions, and both Champions Presents collections. And we didn’t forget Champions: New Millennium and its two supplements.

Hero, look sharp! This revived April 2017 Champions 4E Universe Bundle is the second of two offers that give you a new chance to get the complete Champions Fourth Edition line (1989-2001) of tabletop superhero roleplaying action from Hero Games. If you haven’t already bought our revived Champions 4E Essentials with the “Big Blue Book” and other vital books, start there first! Then fly back here for this stupendous addition with thirty-seven supplements and adventures.

For just US$17.95 you get all nineteen titles in this revival’s Starter Collection (retail value $97.50) as DRM-free .PDF ebooks, including five Enemies books of supervillains, ten adventures, and the highly regarded San Angelo: City of Heroes line from Gold Rush Games.

And if you pay more than the threshold price of $35.97, you’ll also get this offer’s entire Bonus Collection with eighteen more titles worth an additional $110, including nine Dark Champions books, two collections of Heroic Adventures, Kingdom of Champions and other location books, Foxbat Unhinged, and — yes! — Champions in 3-D, the dimension-roaming campaign book that holds pride of place in every HERO fan’s trophy room. Together these two revived offers give you the entire Champions Fourth Edition line!