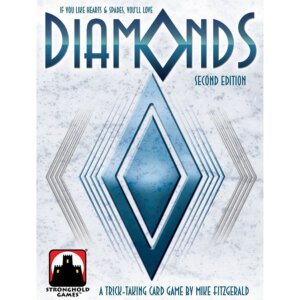 Stronghold Games will be releasing a new edition of the trick taking game Diamonds this Fall. The game will now feature an additional thief mode to add to the original gameplay. Diamonds is for two to six players, ages 8+, plays in around 30 minutes, and will carry an MSRP of $24.95 when it arrives this September.

Diamonds is a trick-taking card game in which players collect diamonds—not cards bearing that suit, mind you, but rather actual diamond (acrylic) crystals included in the game.

What makes the game of Diamonds different from other trick-taking card games is that when you cannot follow suit, you get a “suit action” based on what suit you do play. Suit actions are also taken by the winner of each trick as well as at the end of a full round of play.

Suit actions will enable players to take diamond crystals from the supply, moving them to their “showroom” (where they may score 1 point) or to their “vault” (where they will score 2 points). The vault is a secure area, but the showroom is vulnerable to theft by the other players. Whoever has the most points in diamond crystals at the end of the game wins!