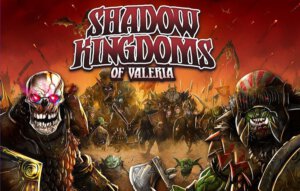 The latest game in the Valeria series hit Kickstarter yesterday, for Daily Magic Games,and easily funded in the first few hours. Shadow Kingdoms of Valeria places players in the roles of evil monster wardens all vying to be named as general of the army set to invade Valeria. The game is a mix of dice drafting, set collection, and worker placement. Shadow Kingdoms of Valeria is for one to five players, ages 14+, plays in 30-75 minutes, and you can reserve a copy of the game – including two expansions – for a $55.00 pledge through July 31. Expected delivery of the finished product is May of next year.

You can check out my preview and overall thoughts about the game right here.

Valeria is a rich and wonderful world that you’ve come to know through Valeria: Card Kingdoms, Villages of Valeria, Quests of Valeria, Corsairs of Valeria, and Margraves of Valeria. Each game is unique and brings new experiences to the gaming space and to the lore of the Valeria Universe. Now it’s time to look at the Valeria Universe from a darker perspective. The monsters are fed up with the Humans, Elves and Dwarves encroaching on their lands and slaying their populace. It’s time for monster-kind to take back what was once theirs. It’s time for the Shadow Kingdoms of Valeria!

Shadow Kingdoms of Valeria is a 1 to 5-player game designed by Stanislav Kordonskiy; developed by Isaias Vallejo, David MacKenzie, and David Iezzi; and illustrated by Mihajlo “The Mico” Dimitrievski. At its heart, Shadow Kingdoms of Valeria is an engine-building game where you’ll draft Troop dice to complete battle plans, hire Champions to fire up your engine, and level-up your Warden’s abilities to pull off amazing combos.