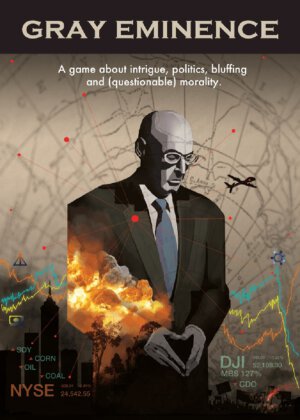 An interesting looking global domination game is on the horizon from Dragon Dawn Productions. In Gray Eminence, players represent shadowy movers and shakers behind the curtain of world geopolitics as each aims to steer their nation to victory. The game is for three to five players, ages 15+, plays in 60 to 90 minutes, and will carry an MSRP of $59.99. There’s no exact release date as of yet.

Gray Eminence is a 3-5 player game lasting 60-90 minutes, in which players take the roles of powerful puppet masters in the modern world, each working towards common goals as well as their own, secret, agenda

Each shadowy figure uses money, power and influence to steer the course of multiple factions toward their own inscrutable ends.

”Gray Eminence is Twilight Struggle for the modern age, between multiple powers vying for dominance and the players are the power behind the throne to steer human destiny.”

The winner of Gray Eminence is the person with most progress toward their winning conditions at the end of the game.

An éminence grise (French pronunciation: ​[eminɑ̃s ɡʁiz]) or grey eminence is a powerful decision-maker or adviser who operates “behind the scenes” in a non-public and unofficial capacity. In this game the players adopt roles of the gray eminences working toward their own victory conditions. It’s a game about intrigue, politics, bluffing and (questionable) morality.