Next month will see the launch of a Kickstarter to bring the AEG family game Shake That City to the public. In the game, players will compete to score the most points through city tile placements based on the results of randomly distributed cubes. Shake That City is for one to four players, ages 10+, and plays in 20 to 40 minutes. The Kickstarter will launch on November 29th.

Shake That City is a family puzzly tile-laying game for 1-5 players, that plays under an hour! The game is played over a series of rounds. The active player shakes the Cube Shaker and presses its slider to reveal a 3×3 pattern, based on which they need to place the corresponding building tiles of a single color of their choice on their board. The building tiles correspond to roads, factories, shops, parks and of course, homes. The other players then pick any building color other than the one the active player picked, then place matching colored tiles in the matching pattern on their board. Players earn points for tile-placement combinations and for the completed bonus point tiles around the edge of their board.

• Roads wants to connect to an edge of the board.
• Factories wants to be next to other factories and roads.
• Homes want to be placed in clusters that are as small as possible — the smallest being a single tile — so long as they’re not next to a factory.
• Parks wants to be next to homes and factories.
• Shops score increasingly more the closer they are placed to the city center, but if they’re not placed on an edge, they need to be adjacent to a road connected to the board’s edge in order to score. Without road access, you’ll have no products to sell!

At game’s end, players earn points for tile-placement combinations and for the completed bonus point tiles around the edge of their board.

Jeff McAleer
Founder/Editor-in-chief of The Gaming Gang website and host of The Gaming Gang Dispatch and other TGG media, Jeff tackles any and all sorts of games but has a special fondness for strategy, conflict sims, and roleplaying games. Plus, he's certainly never at a loss for an opinion...
Latest posts by Jeff McAleer (see all)
Tags: AEG, Kickstarter, Shake That City 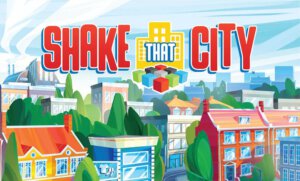 Next month will see the launch of a Kickstarter to bring the AEG family game Shake That City to the public.
0
Awful