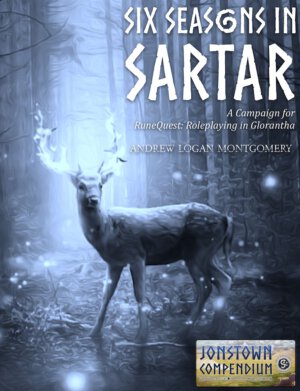 A new adventure supplement is available for RuneQuest: Roleplaying in Glorantha, from Chaosium Inc, by way of the Jonstown Compendium. Six Seasons in Sartar provides a campaign in which young tribe members follow the rebel Kallyr as they look to liberate the peoples of the land. The 144 page PDF is available at DriveThruRPG for $19.95.

A group of young people come of age in an isolated mountain clan.They are the first generation born and raised after the Lunar Conquest, and saw their people bleed and die in Kallyr of Kheldon’s failed rebellion. Yet Kallyr still believes she is the one destined to liberate Sartar, and Fate–or Luck–is about to put these young Sartarites in her path…

INSIDE THIS BOOK YOU WILL FIND”

“Six Seasons in Sartar,” an epic six-scenrio campaign written for RuneQuest: Roleplaying in Glorantha but easily adaptable to other systems. Based on the Third Age epic poem of the same name, the campaign plays like a novel, with character arcs, plot twists, and themes, but is still completely driven by players’ choices and group tastes.

“The Riddle” and “Rites of Passage,” a pair of female and male adulthood initiation rites usuable in any Heortling campaign.

“Episodes,” a dozen “side quest” or “mini-games” usable in this or any other Sartar campaign. These episodes include rules for cattle raids, courtships, mass battles, initiations, heroquests, weddings, funerals, feasts, and much more.

“HeroQuests,” a chapter on running these in RuneQuest.

Based on the popular blog series of the same name, “Six Seasons in Sartar” has been completely rewritten, revised, and expanded for this book.