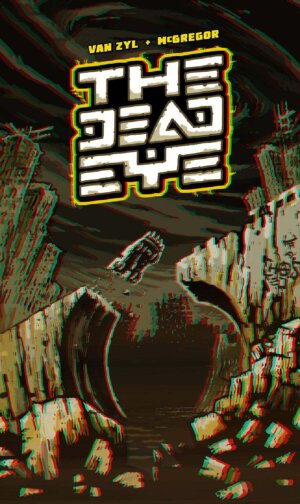 Hitting stores later this month is a solitaire, science fiction, adventure card game from Pleasant Company Games. In The Dead Eye, designed by Simon McGregor, the player has crash landed and must make their way across a hostile planet while trying to make an escape. The game is for one player, ages 8+, plays in around 10 to 30 minutes, and will carry an MSRP of $35.00 when it hits stores. And… Yes… The cards are 3-D.

Assume the role of a lone thermo-bandit downed on a hostile backwater planet. Your mission? Find the next safe haven before you lose all hope and strengthâ€¦ and maybe, just maybe, find a way off of this desolate rock.

Cards in The Dead Eye represent Encounters that can have one of two Outcomes: Good or Bad. A Bad Outcome is triggered by a buildup of dangerous Heat while a Good Outcome is triggered by a buildup of valuable Juice. Your starting Draw Deck includes 6 cards with Juice and 6 cards with Heat. As you play through the deck, some of these cards will raise your Heat and Juice levels, while at other times the cards will be used as the Encounter itself.