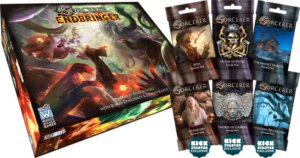 The latest expansion for Sorcerer, from White Wizard Games, has easily passed 300% Kickstarter funding in its first couple of days. Sorcerer: Endbringer adds both solitaire and cooperative mechanics to the popular fantasy game of dueling Victorian mages. There are a slew of pledge levels, and two completely new sorcerer decks, and you can score the new additions for a $75.00 pledge through July 23rd. Expected delivery is a year from now, July 2021.

At the start of the game, each player will create a unique sorcerer by combining a Character Deck (which shows who you are) with a Lineage Deck (which represents the style of magic you inherited), and a Domain Deck (which reveal where you honed your magical powers).
Shuffle those cards together to form your Grimoire, which contains your dark magic and evil minions and you are ready to play!

In Endbringer One to three players will team up to battle against a crazed demigod known as a Maneater. You’ll create this adversary by combining a Nemesis (who they are), with an Aspect (what army they lead), and a Scenario (what they are doing). For example you may battle Erling Khan the Deathdealer who is Leading the Invasion.

Each of the four different oversized Nemesis Cards comes with a large standee and a unique “Nemesis Deck”.

At various points in the game, you will reveal the top card of their Nemesis Deck. Each card can generate multiple different effects depending on the game state.