Ancient Greece is the focus of the latest wargame from Plague Island Games. In Sparta!, players will lead either the Athenian/Theban democracy or the Spartan oligarchy as they battle for control of Hellas. The game is for one or two players, ages 14+, and plays in two to three hours. The project funded in its first few hours and you can reserve a copy for a $60.00 pledge through October 12th with an expected delivery in October 2023.

In SPARTA! you take the role of the Athenian or Theban democracy, or the Spartan oligarchy in a battle for hegemony over the Greek world.

Area Control with influence placement from event cards played from a player’s hand.

Armies & ships raid or siege to take control of important spaces on the map.

Leaders who level up, becoming more powerful each with unique effects.

Fight battles with the simple battle card system, with bonuses for different troops.

Jeff McAleer
Founder/Editor-in-chief of The Gaming Gang website and host of The Gaming Gang Dispatch and other TGG media, Jeff tackles any and all sorts of games but has a special fondness for strategy, conflict sims, and roleplaying games. Plus, he's certainly never at a loss for an opinion...
Latest posts by Jeff McAleer (see all)
Tags: Plague Island Games, Sparta, Stuart Tonge 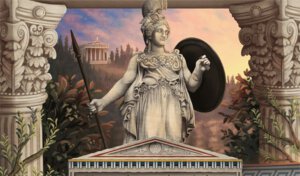 In Sparta!, players will lead either the Athenian/Theban democracy or the Spartan oligarchy as they battle for control of Hellas.
0
Awful