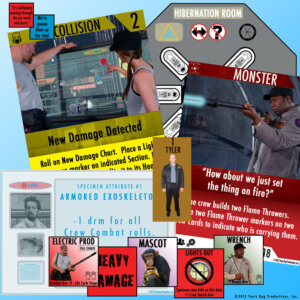 Well, I didn’t get this up in time for Elliott’s self appointed “Spooky Wednesdays” but if you’re a fan of horror games a new Kickstarter project has just launched: Specimen from Toxic Bag Productions. This two player card game pits each player against each other as one takes command of the crew of a deep space freighter while the other player controls the Specimen which is bent on devouring the crew. Hmmm… Alien anyone?

RPG sound effect pioneers Toxic Bag Productions announced today the beginning of their Kickstarter campaign focused on the creation of their unique horror board game SPECIMEN. The small business began as a way to bring a more cinematic experience to tabletop gaming via sound effects; this new creation is the next stage of evolution for the company. In that same vein, live action photos are now accenting their fright filled card-driven ride into Deep Space where players can take the role of crew or space alien. Rewards range from basic copies of the game to naming the rival corporation in the story. “This was a game that I really wanted to play, and it wasn’t out there. So we decided to make it,” explained Steve Baldwin, creator of SPECIMEN. “The game has been extensively playtested for three years. Fans from all over love it and people have routinely asked to buy our demo copies. The game is ready. It’s time to unleash SPECIMEN onto the world. And with your help, we can do that!”

The Story of Specimen:

Deep Space – Echo Quadrant 3H-8– The fully loaded commercial freighter TCS Brown, its seven-member crew in suspended animation, is making the return run to Earth. In the cargo hold lies Dr. Viktor, also in suspended animation, and the mysterious specimen containers that came on board with him.  Awoken from their slumber to repair the damage caused by a meteor collision, the crew discover to their horror that Dr. Viktor has been killed and one of the mysterious specimens has been let loose as a result of the damage…and it is a life form that will stop at nothing to survive. The seven astronauts have only the tools and resources on board to subdue and kill an organism never before encountered. An organism that evolves quickly into a nearly-unstoppable predator. Now, a simple repair job becomes a desperate struggle for survival.

SPECIMEN is a card-driven two-player game. Each turn comprises four action rounds, where each player can perform one of several possible game actions. The Specimen’s movements are hidden from the Crew player behind a game screen, and the Specimen’s location is only revealed when the Specimen attacks…or if the crew is lucky (or unlucky) enough to find it!