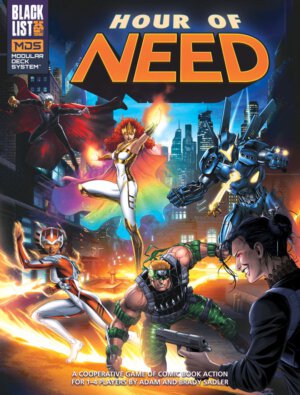 A unique looking super hero game is about to wrap a successful Kickstarter run for Blacklist Games. In Hour of Need, up to six heroes (depending on the edition you back) take on the super villains and their minions on episodic issue boards. The game is for one to up to six players, ages 14+, and plays in 30 to 120 minutes. This project has recently cracked the 100% funding level and you can reserve a copy of the basic two player game for a $35.00 pledge through November 26th. There are a variety of pledge levels and different player counts. Expected delivery is November of next year.

The pages of Modern-day Saga Comics are filled with heroes and villains doing battle across both reality and the shared inter-dimensional space of the Astrallacy. While nefarious villains seek power and material wealth, valiant heroes fight to defend those that are caught in the middle of these epic conflicts—it is these everyday people that make reality worth fighting for, and now is their hour of need!

Hour of Need is a cooperative game of comic book action for 1–4 players (or up to 6 players with available expansions). Designed by Adam and Brady Sadler, Hour of Need is the latest installment in their line of Modular Deck System (MDS) games. Set in an original world inspired by modern comic books, Hour of Need puts players in the roles of diverse heroes attempting to thwart dangerous villains from carrying out nefarious deeds!

In each game of Hour of Need, players will need to use their chosen hero decks to tactically solve problems and thwart their chosen villain’s schemes, as presented by the chosen issue deck and board. Utilizing simultaneous turns that provides the framework for collaborative strategy, players have to work together to reveal the villain and prepare for the final showdown!

Featuring fast gameplay, highly-detailed miniatures, and a variety of modular fixed decks for heroes, villains, and issues, Hour of Need lets players create their own comic book stories in the MDS Comics world!