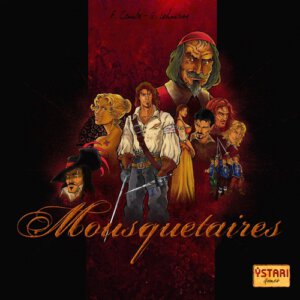 Coming up at this October’s game extravaganza in Essen, French publisher Ystari Games will reveal its first novel-to-game adaptation with the release of the semi-cooperative game Mousquetaires du Roy (“The King’s Musketeers”). In the standard game one player works against all the others, thus making it “semi-cooperative”, but will also include variant rules which allow all the Musketeers to compete against the game system. The game will be published in the U.S. by Rio Grande Games and in Germany by Asmodee.

Designed by François Combe and Gilles Lehmann, Mousquetaires du Roy is based on Alexandre Dumas’ novel The Three Musketeers. Most of the players take the role of one of the famed Musketeers – Athos, Aramis, Porthos or the novel’s hero d’Artagnan. Just as in the classic tale, they’re trying to recover the jewels that the Queen of France gave to her lover, the Duke of Buckingham, so that she can wear them at a gala brought about by the scheming Cardinal Richelieu who has been made aware of the affair. The set of diamond jewels were originally given to the Queen by her husband, King Louis XIII, and if she were to arrive at the gala without them her infidelity will be revealed. The Cardinal knows this and wants to bring about the Queen’s downfall, so he brings in a special agent of sorts, someone who will obstruct the Musketeers and create distractions that the Musketeers must counter. This agent is Milady de Winter, ex-wife to Athos, and she’s played by one player who works against all the others. If Milady can keep the Musketeers from returning the jewels in time – or if she completes one of her other missions – then that player wins the game.

The Musketeers have their hands full as they must avert the death of d’Artagnan’s beloved, Constance Bonacieux, prevent the King’s troops from completing their siege of the seaport of La Rochelle, battle with agents of de Winter and the Cardinal, as well as bringing the diamonds  back from England to be placed once more in the Queen’s hands. Should the Musketeers fail, the Queen will surely hang!

Can the Musketeers work together and save the Queen? All for one and one for all!

The game board shows important locations from the story: La Rochelle, the Louvre, the Bastille, Paris, Richelieu’s quarters, and so on. In the upper left corner of the board lie the time and money tracks as well as the Arsenal, which holds equipment and upgrades that Musketeers can purchase. The heroes start will very little resources so they’ll need to perform good deeds to add pistols to their the purse before they can boost their abilities.

Each Musketeer character card shows the number of life points he has, the values of his gentlemanly skills (Erudition, Nobility, Gallantry and Panache), combat strength, special maneuver in combat and aspecial ability. For example, as ex-husband to Milady, Athos can never be attacked by Milady’s powerful henchman Rochefort or else he’ll know who is behind the threats plaguing the Musketeers. Each Musketeer starts the game with a hand of Adventure cards, which are divided into Skill cards (boosting a Musketeer’s existing skills), Combat cards (boosting the combat ability), and Character cards (representing special individuals from the story who can provide unique bonuses).

Mousquetaires du Roy will last at most eleven turns, with Milady winning if the time token reaches the ominous head of Richelieu at the bottom of the time track prior to the Musketeers reclaiming and delivering the jewels. Milady also wins if she kills Constance in Paris, brings about the fall of La Rochelle or brings information about the Queen’s infidelity to light. Each turn Milady secretly chooses to travel to one of six locations, most of which will provide her with a special action if the Musketeers have not located her by the end of the turn. She can also draw or play Treachery cards to create unfavorable playing conditions for the Musketeers.

The Musketeers themselves each have three actions available, which they can play in any order, allowing them flexibility in how they’ll tackle the threats presented by Milady and by the ever-present clock running out of time to preserve the Queen’s honor. They can draw Adventure cards, move amongst the locations, trade cards with one another, defend La Rochelle or tackle the challenges and adversaries that await them in Paris and the Louvre.

In these latter two locations, Milady plays adversaries (and possibly a trap) to accompany specific Paris and Louvre cards that the Musketeers can overcome only through the application of skills. Thus, one Musketeer might visit Paris to use his Nobility to remove a challenge, while another visits later to duel an adversary.

Duels are carried out through blue and red dice shown below, with Musketeers playing combat cards to boost the number of dice they roll, up to a maximum of six. Each Musketeer, and most of the adversaries have a special fighting maneuver, so if the dice show this combination, then that duelist automatically wins, causing the opponent to lose a life point. If no one achieves their maneuver, then you compare swords against shields to see how much damage each duelist delivers. If no one takes damage, then each side removes a die and they roll again, with duels continuing until someone takes damage or else no dice remain. Most adversaries have only one life point, making them fairly easy targets for the Musketeers, but some have more, including Rochefort, who requires five hits before he’s eliminated.

If a Musketeer loses his last life point, he must then return to the Vieux Colombier hotel to recuperate, costing him an entire turn to get back to fighting trim. While life points are primarily lost through duels, Musketeers can also sacrifice themselves in battle at La Rochelle to keep Milady from gaining an edge there. While in La Rochelle, a Musketeer can lay down a Combat card to represent power in staving off the King’s attackers. At the end of each round, Musketeers roll dice equal to the combat strength on display in La Rochelle, while Milady rolls 1-4 dice based on the current turn number. Whichever side has more swords then pulls the La Rochelle token towards its side of the playing area. A Musketeer can sacrifice a life point to cancel one of Milady’s swords, but similarly she can visit La Rochelle to permanently remove one of the Musketeer’s Combat cards.

In the Louvre, each turn that the challenge card stays in place brings the Queen closer to shame. If the Musketeers clear the card in the first two turns it is present, for example, they earn Epic tokens that will aid them in their central quest to return the jewels. After the third turn, the Queen’s reputation slips a notch, and after the fourth her rep drops two more spaces, with Milady earning a treachery card to further pursue future mayhem. A new challenge card is then revealed, with the Musketeers needing to cushion the Queen once more.

The quest for the jewels takes place on two double-sided game boards set on the upper middle portion of the gameboard. The Musketeers must fight through waves of adversaries laid down by Milady, sometimes not knowing the strength of their opponents and sometimes facing foes who will not weaken in duels after ties. Their gentlemanly skills are also required, and on occasion a trap will spring unexpectedly to cause more damage. The four stages of this quest represent the trip to England to reclaim the jewels and place them back in the hands of the Queen, and Musketeers will be hard-pressed to focus on this quest – central though it may be – due to all the other complications Milady can engineer.

That being said the Musketeers have their own means of staving off defeat because victory in La Rochelle or the trumping of Rochefort can put a “One for all, all for one!” card in the hands of the heroes. It is a trump card of sorts that can snatch victory from Milady’s hands by giving the Musketeers more time, granting more Epic tokens, or even buffing up the Queen’s façade of honour.

Can the Musketeers complete this epic adventure given all the stands in their way? They can! As long as they take up the cry, “All for one and one for all!”

To me, Mousquetaires du Roy looks like a winner and I’ll be waiting to get my hot little hands on it soon!

As a special note, to help entice buyers to purchase the game at Spiel 2010, Ystari’s Cyril Demaegd says “we’ll release the game in Essen with a special gift for our buyers. Each buyer will be given a special ‘fifth Musketeer’ (Treville) with his figurine and player sheet. With Treville, players will be able to play with six players (or to replace another musketeer, of course).”

In addition, says Demaegd, “We’ll give away a really cool T-shirt of d’Artagnan. Stocks will be limited, so reservations will be mandatory.”