Elliott and Jeff discuss this past weekend’s Vul-Con convention which took place in Phoenix, Arizona. What begins as a rehash of the weekend con delves into the topic of game stores actively working against the success of a local convention. All this and a sprinkling of our usual nonsense…

Our apologies for the occasional background noises as this was a completely spur of the moment podcast and Elliott’s family was going about their normal evening activities.

Download the show to take it on the go right here.

And don’t forget, The Gaming Gang is available on iTunes.

Also add the podcast feed to your favorite aggregator or app with this link. 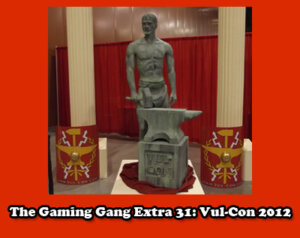