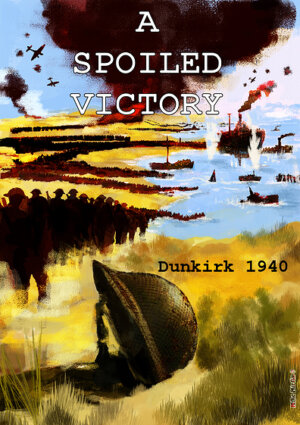 Our good friend Hermann Luttmann has a new design available through White Dog Games. In A Spoiled Victory, you’ll take on the role of British command during the crucial Spring months of 1940 when the fate of over 330,000 Allied troops hung in the balance as Hitler’s soldiers and Panzers were poised to crush the remaining British, French, and Belgian defenders trapped against the coastline of France. You can grab the boxed edition of A Spoiled Victory right now for $38.50.

“You can never talk to a fool. Hitler spoiled the chance for victory.” – General Wilhelm von Thoma, Chief of the Tank Section of OKH, June 4, 1940

A Spoiled Victory is a solitaire game designed by Paul Fish and Hermann Luttmann that challenges the player with making decisions similar to what the British command was required to make during the evacuation at Dunkirk in May-June of 1940. Points are allocated each turn for defense of the perimeter, creation of evacuee units, and moving evacuees from the beaches to the safety of England. You cannot save them all, so you must pick who will stay and fight and who will escape to fight another day. The level of victory or defeat is measured by the number of troops and the amount of equipment that is saved through evacuation.

In Magnificent Style Deluxe Edition | Review and How to Play